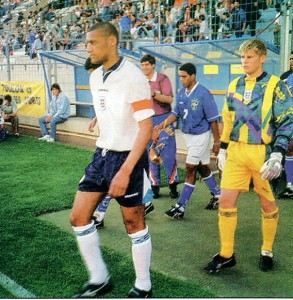 Tributes are continuing to pour in for Dean Richards as Wolves and Tottenham prepare to this afternoon officially mourn his passing.

Fans of the two clubs will be united in a minute’s applause before the televised Premier League game at Molineux.

And the emotion of the occasion is underlined by the on-line sentiments of some former team-mates.

On Facebook, Neil Emblen, who was in the side on the day the Bradford-born defender made the first of his 145 Wolves appearances, wrote: “Can’t stop thinking about the tragic loss of a top, top man. My heart goes out to Deano’s wife, Samantha, and family. RIP Deano.”

Emblen pointed out the following link http://www.banksslionhearts.com/blog-view/49/tribute-to-dean-richards while the cyber community may also be interested to know of the Dean Richards 36th Minute Appreciation group on Facebook.

More moving words from Down Under came from the heart of Brian Law, who said: “Deano, a legend, a fantastic defender, humble kid, brilliant footballer and not a bad DJ. Played alongside him when was only a kid on his debut. I thought: ‘This kid is 150 times better than me’…and he went on to prove it to all. Praying for his wife and kids.”

And the club will be overseeing a fitting tribute today, with Dean’s widow and their sons Rio and Jaden due to attend.

In addition, a representative from each of his four professional clubs is to hold aloft their team’s shirt in the centre circle in his memory. The items will be signed by members of the current squads and then auctioned in aid of St Gemma’s Hospice in Leeds.

Ex-Wolves managers Graham Taylor and Dave Jones, who both signed Richards, are also likely to be present, as are ex-Southampton striker James Beattie and Bradford City joint-chairman Mark Lawn. 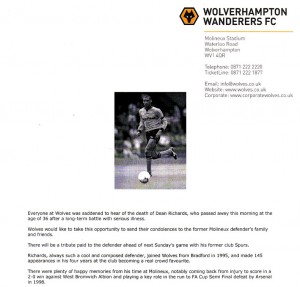 How Wolves last week informed the media of the deeply upsetting news about Dean Richards. Click on the text to enlarge it.

Both sets of players will wear black armbands during the game.

A nine-page tribute in the match-day programme will contain the above picture – taken at the 1995 Toulon tournament by Wolves Heroes’ David Instone.

Deano was chosen ahead of David Beckham and Phil Neville to captain an England under-21 squad under the management of Ray Harford and celebrated his 21st birthday in the south of France.