Neil Steps Up With Kiwis 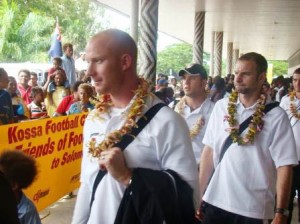 Neil Emblen on arrival in the Solomon Islands a couple of years ago. His travels are somewhat different now to those he was used to with Wolves.

Neil Emblen is on top of the world Down Under after being added to the management team for New Zealand’s trip to the Far East later this month.

Three months before his 40th birthday, he has been summoned into the international set-up for the first time in the role of technical assistant.

Emblen’s call has come from another former Wolves man, Ricki Herbert, the national boss who led the All Whites on their adventure at last summer’s World Cup finals.

“It is a huge honour for a non-Kiwi to be chosen for a role like this, especially for someone like myself who is relatively new to coaching,” Emblen told us.

“I’m obviously very excited to be given a chance with the international squad and want to make the most of this opportunity.”

In a special message to Wolves Heroes, he added: “It may turn out to be a one-off but I thought you would like to know anyway.”

Emblen will be working with other fresh blood, Herbert having included six uncapped players in a squad of 30 which will be trimmed to 22 next week.

The All Whites take on newly-crowned Asian champions Japan in Tokyo on March 29, four days after facing China in a game that has been moved from Nanning to Wuhan.

Herbert, whose side were unbeaten in South Africa last summer, is now looking to build a team capable of reaching the 2014 finals in Brazil – a mission which starts in earnest with six qualifying games next year. 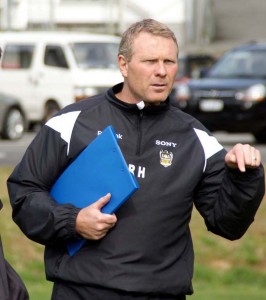 “These are exciting times,” he said. “We were able to look beyond the last World Cup when we selected that squad, so now we have a pretty solid core of players to begin with and ones that served their country very well.”

Herbert played 49 Wolves games from 1984 to 1986 while Emblen’s tally over two Molineux spells was 235, exactly the same as Joleon Lescott.

Emblen, who has twice been to Japan to play for Waitakere United in the FIFA World Club Championship, recently managed the club to another ASB (National) Championship title.