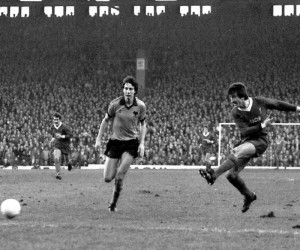 Colin Brazier attempts to close down David Johnson in Wolves' game at Liverpool in December, 1980.

Wolves All Stars have their first outing of the year when they take part in a memorial game for the brother of former Molineux utility man Colin Brazier.

Andi Brazier passed away at the age of 48 early last year following a lengthy illness, having had trials with Wolves as a youngster.

But the stylish midfielder became better known in non-League circles and spent ten years at Boldmere St Michael’s in the 1980s and 1990s.

And the Sutton Coldfield club remained so close to his heart that he asked that all donations at his funeral be directed into the coffers at their Church Road home.

“To express our gratitude and ensure a lasting reminder of this wonderful generosity, the club will be introducing an award in Andi’s honour, to be presented at our annual awards presentation,” Boldmere said on their website.

“And the Mikes would like to invite you to join us at a special Memorial Day in his honour, on Sunday, March 27.”

Andi’s wife Linda and sons Elliott and Alex will be guests of honour and his brother-in-law Andy Perks is a familiar face at the club as their match-day raffle collector.

Colin Brazier may also be making an appearance, although early reports suggest he may turn out – fitness permitting! – for Boldmere rather than the All Stars.

“I think the last time I played was eight and a half years ago in a memorial game for Jeff Astle,” Colin said today. “The heart tells me to play but the body is saying something else altogether.

“The family are very grateful to Boldmere for what they are doing in Andi’s memory and it is fitting that the match is against Wolves All Stars because he had trials there in John Jarman’s time and played a couple of youth games. 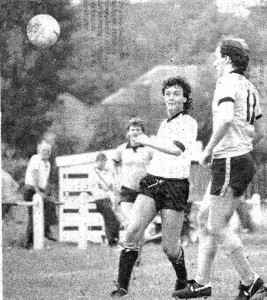 Andi Brazier in action for Boldmere against Hurley Daw Mill.

“Walsall also had a look at him but nothing came of it and he played virtually all his career for Boldmere.”

Andi once scored a hat-trick in a 5-1 victory at Studley and was interviewed on BRMB afterwards as it was the station’s Non-League Match Of The Day.

The game against Wolves All Stars at the Trevor Brown Memorial Ground two weeks tomorrow kicks off at 2.15pm. Admission is £3.