Memories To Stir The Passions 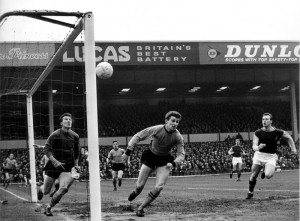 A close shave for keeper Fred Davies and his Wolves colleague Bobby Thomson at Villa Park - venue for this weekend's big Midlands clash.

As fellow founder members of the Football League, Wolves and Aston Villa have met in the Second City almost 60 times, wartime competition apart.

And Wolves fans won’t want to spend too long looking at the win-loss account before tomorrow’s big Premier League meeting because Villa are well ahead.

Mick McCarthy’s side, in fact, halted their club’s run of eight straight defeats in competitive meetings at the venue with the 2-2 draw last spring – and Villa won two out of three home clashes prior to that as well.

Wolves’ last win there was in 1979-80 and the very staging of that game came as a huge relief to Andy Gray.

We all know what the striker – transferred between the two clubs a few months earlier for a British record fee – accomplished when he lined up in the League Cup final against Nottingham Forest. But he would not have been able to play had Villa not resolved their FA Cup quarter-final clash with West Ham at the first attempt the previous weekend and so allowed him to serve a pre-Wembley suspension. 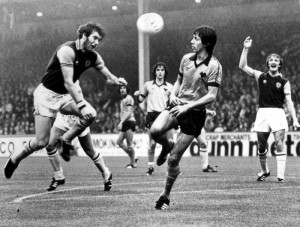 Colin Brazier - a central figure at Villa Park over 30 years ago - tangles with Peter Withe.

Colin Brazier scored one of the goals in that 3-1 Monday night Wolves win, having lobbed one in at the wrong end when the boot was on the other foot in the fixture two years before.

The last of Bert Williams’ 420 League and Cup games for Wolves came at Villa Park in 1957 while matches between the sides can claim further historic significance.

No fewer than ten times, they have faced each other on successive days in Bank Holiday double-headers. And four of their clashes have come on Christmas Day – the last in 1951.

There have been lengthy absences as well to test whether they really do make the heart grow fonder.

The clubs spent 19 consecutive years in separate divisions following Wolves’ relegation in 1984 but perhaps what is less well remembered is the fact they didn’t engage in League combat for 11 seasons from 1965 onwards. 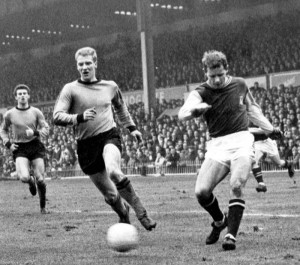 Familiar foes....Bobby Thomson and Ron Flowers give chase as their former team-mate Barry Stobart centres at Villa Park in 1964-65.

At least they had some exciting skirmishes to remember each other by, the clubs meeting five times in under three months in 1964-65, with Wolves prevailing at the third attempt (at neutral Albion) in an FA Cup fifth-round tie.

The stakes and appeal of this weekend’s game is obvious but the attendance won’t be able to hold a candle to those who flocked to this particular derby 60-odd years ago.