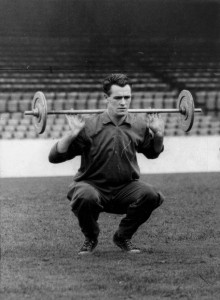 Peter McParland in his playing days.

Current events in Libya are of particular interest to Peter McParland – the former Wolves and Aston Villa forward is one of the handful of Britons to have coached there.

The 76-year-old Ulsterman, who was at Villa Park yesterday to see the Premier League survival battle take another twist, spent a season and a half in North Africa from 1979 and says he had a low opinion of the state leader even then.

“The people generally were lovely and I was based in a nice seaside resort, Derna, at a club called Africa (pronounced Afr-ee-kay),” he said.

“The players were amateur and the standard wasn’t very good. The team were struggling in the top division when I went, so I was a bit of a hero when we stayed up on the last day of the season.

“But Gaddafi didn’t like activities that weren’t for the people as a whole. An 11-a-side game wasn’t for him and he as good as stopped football in my second season.

“I stayed in contact with the club when I came home for Christmas but they eventually said there was no point me going back. I thought I might not hear anything more from them but they were good enough to pay up the remaining three or four months on my contract.

“Derna is about three hours’ bus ride from Benghazi and we had to fly from there if we were playing in Tripoli. We were about one and a half hours from Tobruk, where a former Villa and Sunderland player called Alan O’Neill was coaching.

“Our sides used to play each other in friendlies and practice matches and we would get together to watch matches on TV because there was a lot of interest over there in English and Dutch football.

“But Gaddafi was an idiot even then. As well as refusing American help to develop the coastline as a possible tourist area, he didn’t agree with his people knowing what was going on in the outside world.

“He didn’t like you watching TV unless it was to see what he was going on about all day.”

McParland, who we also featured last June, was a short-term success at Molineux in the early 1960s, scoring ten goals in only 21 games in a side on the wane.

He is a legend at Villa, though, after scoring twice in the club’s 1957 FA Cup final win over Manchester United and the decider in their League Cup final victory against Rotherham in 1961. 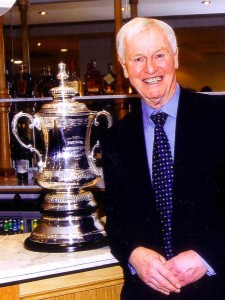 ....and with the FA Cup that his famous Wembley brace secured. Picture courtesy of Aston Villa.

Curiously, his first three games in Villa’s senior side were all against Wolves. Having spent a year in the reserves following his debut in 1952-53, he scored the winner in a 2-1 Christmas Eve game at Molineux in 1953-54 and also lined up when Stan Cullis’s side took their revenge two days en route for the League title.

The winger’s impact in gold and black was possibly more dramatic. He made one goal and headed another in his first appearance – against reigning double champions Tottenham – netted at Cardiff six days later and scored in a 3-2 win over Birmingham in his third match.

It’s just as well the experienced former Ireland international, who later delivered a brace at home to Bolton and a goal in a 5-4 win at Chelsea, delivered quickly. Wolves still finished only 18th, four points out of the relegation places.