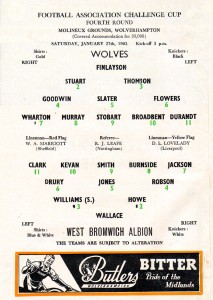 Thomson and Goodwin in; Finlayson's replacement by Davies obviously came too late for the programme printers.

Unusual though it is for us to spotlight a Wolves defeat in this feature – especially one against the opponents in question – the history books show this to be a notable date in the club’s history.

Well, it’s not every day you prepare for a match against your nearest and not so dearest by making SEVEN changes and handing out THREE debuts.

But that’s what Stan Cullis did for this FA Cup fourth-round tie at a time when the competition was much more cherished than it now is. And he followed up by ringing a further four changes and handing out two more debuts the week after.

Wolves had drawn in the League at The Hawthorns on Boxing Day and kicked off the New Year with a 3-1 Cup win over Fourth Division Carlisle at Molineux.

But a 2-0 home defeat against Blackburn and a 7-2 hiding at Blackpool underlined the fact that they weren’t in great shape, with the foot of the table too close for comfort.

The manager’s response was an act of blind faith in youth. Never one to fret over blooding young talent, he prepared for Albion’s visit by drafting in Bobby Thomson at left-back for the injured Phil Kelly and sending for another 18-year-old in wing-half Fred Goodwin at the expense of George Showell.

The third debut was much less by choice, with Malcolm Finlayson injuring a shoulder in training and Fred Davies, 21, being summoned to take his place in goal. At the other end of the team sheet, Cliff Durandt was preferred to Alan Hinton on the left wing.

There were positional changes, too, Bill Slater going to centre-half and Jimmy Murray to centre-forward, with Bobby Mason’s failure to recover from a cold leading to Barry Stobart’s first Cup appearance since the 1960 final.

Thomson was born in Smethwick but had moved to Solihull by the time he was spotted by Wolves playing in Birmingham schools football, in which he was a team-mate of the Villa duo, John Sleeuwenhoek and Alan Baker. Then his family moved to Dudley, so he didn’t have to travel as far to training and games with Wolves.

He had played only six Central League matches by the time of his senior debut but Wolves were a club in transition and Cullis a man in a hurry.

Remarkably, considering the club had gone desperately close to securing the double barely 18 months earlier, they would use 24 players by the end of January, including six different left-backs.

Goodwin was a former England schoolboy international trialist – just the sort of promising lad Cullis loved giving an opportunity to – and had, like Thomson, played for the club in the FA Youth Cup not long before.

“I have had to think about the way the team have been playing rather than the fact we have an important Cup-tie,” the manager said. “We have a history of players appearing in the first team for the first time when they are very young.”

He could have gone on to say that he himself had still been in his teens when he captained the club for the first time. 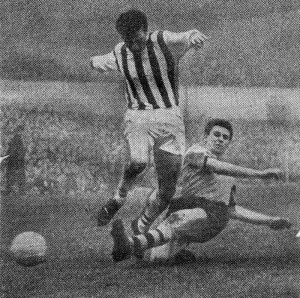 It would have been refreshing to write how the trio of debutants in the 1961-62 FA Cup had played major roles in a rousing Wolves triumph.

Alas, the reality was somewhat different as an Albion side who had overcome Blackpool in the third round prevailed by the odd goal in front of a crowd just over 40,000. And there were differing reviews for the two teenagers.

Sunday People reporter Joe Hulme wrote: “While Thomson had a reasonable game – he worked hard and heavily to stop Alec Jackson – Goodwin, the little lad from Stockport who shows so much promise, was lost in this seething Molineux cauldron.”

Wolverhampton-born Don Howe and Bristolian Dave Burnside, later to become a favourite at Molineux, were star performers for Albion, the latter setting Clive Clark up for a beauty in the 13th minute before Howe’s pass teed the left-winger up for the winner eight minutes after half-time. Murray had equalised from Ron Flowers’ header in the 27th minute.

Goodwin was not retained for the side’s return to First Division action the following weekend but Davies’ blooding turned into an eight-game run and Thomson soon made a regular claim to a no 3 shirt that had passed between the likes of Kelly, Gerry Harris, and Gwyn Jones for several months.

And Cullis was at it again when Wolves welcomed reigning League and Cup champions Tottenham to Molineux a week after the Albion game.

This time he gave debuts to winger Peter McParland, who had played for the reserves at Liverpool on fourth-round day as he was Cup-tied from his time at Aston Villa, and inside-forward Chris Crowe.

They delivered for the manager as well as both scored in a memorable 3-1 victory that was also marked by a goal from Terry Wharton. 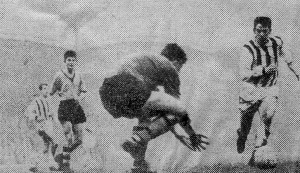 The duo impressed further in the follow-up 3-2 victory at Cardiff – and it was just as well they came flying out of the blocks.

Albion finished in a healthier ninth position but their Cup journey wasn’t destined to last. Tottenham took care of them at The Hawthorns in round five.