Wembley Heroes Back Together 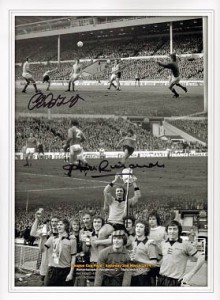 Golden memories from a certain day in 1974.

Kenny Hibbitt and John Richards, the two Wembley scorers when Wolves first lifted the League Cup, are to appear side by side at a night of nostalgia in Staffordshire next month.

The big mates are guests at a supper and quiz evening at the Bagot Arms pub in Abbots Bromley, near Rugeley, on Thursday, April 28.

They will take part in a question-and-answer session and chat to fans about their careers, as well as helping boost the coffers of McMillan Cancer Support, in an evening promoted by Sedgley-based Route 39.

Proceedings kick off, appropriately enough, at 7.30pm, with tickets priced at £15.

Signed copies of a cherished 16in x 12in montage showing the two goals and Mike Bailey hoisting the cup as he is chaired by his team-mates will be on sale at the function.

Route 39 also have two other Wolves personalities on their schedule in the coming weeks.

They host a q & a with Matt Murray at The Cabin in Sedgley on Tuesday, April 19, when the £7 admission cost also includes a football quiz and a charity auction and raffle. 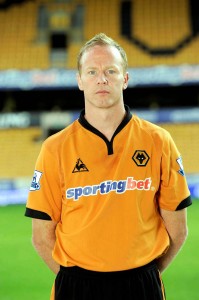 And Jody Craddock steps into the hot seat on Wednesday, April 27, for a q & a night at the Bird In Hand pub in Tettenhall Wood. Tickets for that night cost £5.

Details of all Route 39 events, which include a Ricky Tomlinson evening in Wolverhampton tomorrow (March 31), can be found on their www.route39.co.uk website.

The company also specialise in items of signed memorabilia.