Having An Eli Good Time! 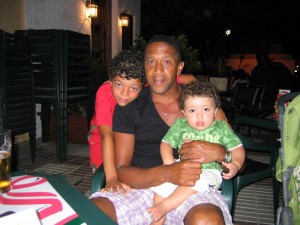 For someone who had to work hard and travel far for everything he achieved in football, Roger Eli has found success close to home in his post-playing life.

Having spent seven or eight years sharpening his business instincts by exporting quality materials in the textile industry, he is now a director of a company selling office supplies from near his West Yorkshire roots.

“A small group of us, including my wife Andrea, set the business up and it has grown year on year,” Eli said.

“We now employ a dozen people from our headquarters in Cottingley, just outside Bradford, and supply business stationery and IT equipment all over the country to businesses, local Government and education organisations.

“I’m so grateful that my life after football has been successful because, like all young players, I thought I was going to play for my country and make 100 appearances for my favourite club – in my case Leeds.

“But it only works like that for a chosen few and I hopped around a lot of clubs, although I was lucky enough to stay at Burnley long enough to become a bit of a cult figure.”

Bradford-born Eli was brought to Molineux by Sammy Chapman in 1985-86, his 15 appearances in that Third Division relegation season seeing him fill five differently numbered shirts.

He already knew what it was to struggle, having failed to make the grade despite two first-team appearances at Leeds. And struggle was certainly the name of the game at mid-80s Wolves.

His three outings under Brian Little the following season (all away) were marked by two wins and a draw but he was to be denied any further first-team opportunities at the club.

“I enjoyed working with Brian,” the 45-year-old added. “You can’t deny what Graham Turner did but Brian was fantastic for me. I think he appreciated that I had stepped down a division from Leeds after Wolves courted me for a while.

“He was excellent for the players in the short time he was there as coach and manager before he was sacked out of the blue.

“If he was leaving you out, he told you why and I appreciated that because I was barely 20 when I signed for Wolves.

“I could play in different positions and had been a striker for Leeds, although I was used mainly in midfield at Wolves except one game at Chesterfield when I was at right-back and got myself knocked out and carried off.

“I also went off when we won a night match at Stockport the following season. I had the original metatarsal. No-one had heard of the injury until then!

“I was still unfit when Graham Turner came in and I managed to break the same bone again on my comeback in the reserves. That didn’t help my chances with him.

“I then had my nose broken when I got on the comeback trail again. I’m not sure how many players Turner released but a pattern certainly formed; if your contract was up, you were out.”

Eli’s career was in danger of becoming a downward spiral as he flitted from Cambridge United to Crewe, where he linked up with David Platt, John Pemberton and Rob Jones, and on to Northwich, York and Bury.

Turf Moor proved a spiritual home, though, and he gained a useful fresh foothold as the 1980s gave way to the 1990s.

“I was no Steve Bull but would always watch one of his videos before playing up front,” he added. “His sheer determination and willingness were fantastic.

“I had five years at Burnley and scored 12 the year we lost in the play-off semi-final to Torquay, then 17 when we won the Fourth Division championship. 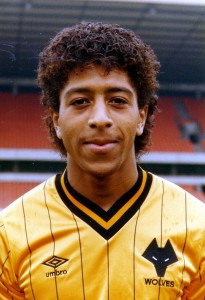 Eli during his 21-game Wolves stay.

“I had found it hard getting my foot properly back on the ladder, so I am very grateful for the chance they gave me.

“After that, I had a season in China with a team called Foshan and briefly did the rounds again with clubs like Scunthorpe and Partick Thistle. There was no fuel left in the tank then and I decided in the second half of the 1990s that it was time to move on to the next chapter in my life.

“I went to college to study textile and design, then moved into business – something I had always intended to do.

“But I’m glad I had a football career. A lot of talented lads don’t even get off the platform.”