Learning Curve For All Stars 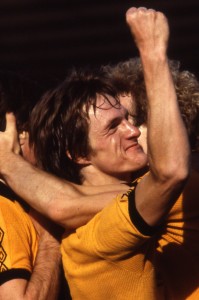 Wolves All Stars make one of their shorter trips of the season on Sunday when they play the Great Western Select X1 at Bilston Town’s Queen Street ground.

The game is in aid of the nearby Wilkinson Primary School, which was the subject of a serious arson attack last October.

Around 80 per cent of the building, in Walter Road, was destroyed and Mel Eves’ squad were keen to play a part in the long battle to restore it.

The Great Western in Bradley is renowned for its Wolves memorabilia on the walls as well as the participation of regulars on various trips Mick McCarthy’s side have made abroad in recent years.

Publican Roger Wood has not only worked hard to bring the fixture about but also overseen the production of a programme. Copies are available by ringing him on 07737-948833.

A circular sent round the All Stars squad also draws their attention to a new venture with a strong Wolves theme.

The website www.footiepix.co.uk contains hundreds of Wanderers photos from the 1970s and we are grateful for the complimentary use of one of them at the top of this article!

Bob Wilson (the subject of a two-page spread) and Ray Crawford (who commands three pages) are two of the former Wolves men who Backpass expertly spotlight. 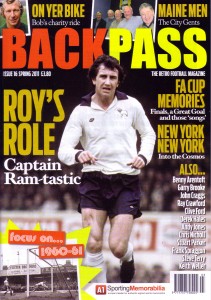 There is also a long New York Cosmos piece that homes in on Dave Clements while a record-breaking scoring feat by one-time Molineux youngster Clive Ford provides another feature.

Find out more details through http://www.backpassmagazine.co.uk or by clicking on the appropriate icon in our ads area.