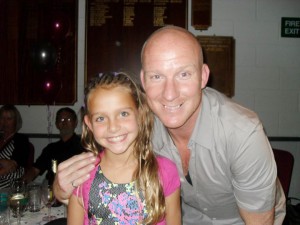 Neil Emblen - all smiles Down Under.

The former Wolves favourite gambled by naming himself in the line-up because of the unavailability of two key defenders and was still on the field when a stoppage-time own goal secured his side’s 3-2 win.

“That’s it,” he said afterwards as he celebrated back-to-back grand final triumphs. “I want to say I’m done with it. It would be a very desperate situation before I would do that again. The rust came back in the second half.”

Emblen, who turns 40 in June, was part of the coaching team when the New Zealand national side drew 1-1 in China recently. The trip to the Far East was also due to have included a friendly in Japan but the game was called off following the earthquake and tsunami there.

The strange things that resurface over the years…..in the bar of a Middlesbrough hotel recently, guests were somewhat surprised to see a bed-ridden Mike Bailey looking out at them from the TV.

It wasn’t the 21st century Bailey either, nor the much-loved Molineux figure, but the younger version.

The unusual screening was a play-back of a video-tape belonging to Teesside hotelier and Boro fanatic John Culley, who had a few clips of a Charlton visit to Ayresome Park on his compilation.

And it was in that game in October, 1964, that Bailey broke his leg, being hospitalised in the north-east and subsequently interviewed in the ward.

“It was just one of those things,” the already-capped England player said, lamenting how he would have to pull out of an England squad he had been called into the following week.

“Two of us went for the ball and he came in a bit late on top of me.”

Fresh Search On For Keeper

Wolves Heroes surprised Gary Pierce two years ago by knocking unannounced on the door of his house in Bury. 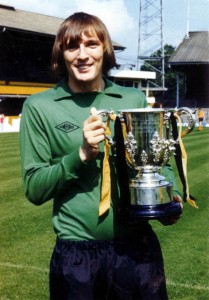 The League Cup in very safe hands over three and a half decades ago.

The 1974 Wembley hero kindly granted us an interview on the spot – and a follow-up by phone several weeks later.

Now he has slipped out of touch again and is being chased by London Wolves, who want to invite him to their 45th anniversary dinner in July.

If anyone can re-establish contact with him on our mutual behalf, we would be very grateful.