Ally Back In Cathedral’s Shadow 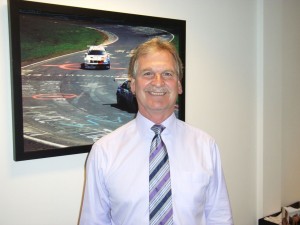 Alistair Robertson is back working in the city that provided him with his first chance in football management.

The late-1980s Wolves captain, employed at BMW dealerships in Shrewsbury and Warley for the last eight years, is now at the Rybrook showroom in Worcester and retracing steps he took 20 years ago.

Having left Molineux in 1990 following a highly successful 136-game stay marked by the winning of the Fourth and Third Division titles and the Sherpa Van Trophy, he headed to Worcester and then further down the M5 to Cheltenham to try to forge a career in the dug-out.

“Things went really well at Worcester at first and we were up near the top of the table,” he said.

“We were one division below the Conference and looking good but the owner ran into financial problems and I ended up having to sell players.

“I moved to Cheltenham as manager when they were still in non-League and it was the same story. The guy who appointed me soon left and the new owner said straightaway I wasn’t wanted.

“I was on a three-year contract, as I had been at Worcester, but eventually left without any sort of pay-out because the working conditions placed on me were impossible.

“I went straight home, put all my football belongings in a big black plastic bag and decided management wasn’t for me.”

It might have been different for the Scot, though, had a particular door opened for him while he was busy leading Wolves out of the Fourth Division.

Exeter, where he had been sent off in a May Day victory for Graham Turner’s side in 1986-87, made him their chosen man around the time Wolves were winning at St James’s Park again the following season.

“I had gone down for an interview without telling anyone at Molineux and we just happened to be playing them shortly afterwards,” the 58-year-old added. 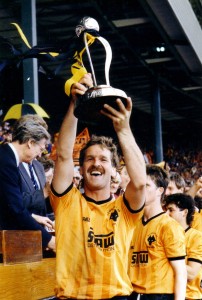 .....as Wolves fans most fondly recall him.

“At the hotel, I remember Jon Purdie showing me the local paper with my name all over the back page, so I was scurrying round hiding any copies I could see!

“On the coach home, Graham Turner asked what all this business was with Exeter and me, and I said it must be just paper talk. He replied: ‘That’s strange because the Exeter directors said you interviewed really well.’