The Only Way Is Down

Slump Followed For Both Victors And Vanquished 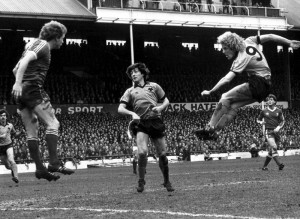 Was Middlesbrough v Wolves in the late winter of 1981 an FA Cup quarter-final with a curse?

It didn’t just leave the losers with a potentially terminal hangover. Little over a year later, even the winners were being given the last rites.

The replay to the tie already has watershed status in Molineux history, having attracted the last of the countless 40,000-plus attendances the stadium had housed.

But the consequences might have been much worse because, the other side of Wolves’ semi-final defeat against eventual Cup winners Tottenham, they and Boro went into tail-spins that almost sent both into oblivion.

They were relegated together at the end of 1981-82 and Wolves were in Receivership within weeks.

Boro were destined for liquidation, too, although on a gentler slope, and players such as Gary Pallister and Stuart Ripley were pictured walking out of Ayresome Park in 1986 while the stadium gates were padlocked behind them, their training gear still inside.

Their crowds, even in the Second Division, dipped below 5,000 and in the same summer that they dropped into the Third, the Football League took a hard stance against them. The pools companies considered the situation so hopeless that they removed Boro’s name from their coupons.

While Wolves were preparing to play for the first time in the Fourth Division, a major battle was being fought to ensure Boro could play at all.

Eventually, as a local consortium delivered a rescue package, it was agreed that Bruce Rioch’s side could offset the continued closure of their ground by starting their season with a home game against Port Vale at nearby Hartlepool, kick-off being set for an hour and a half after the end of Pool’s home clash with Cardiff!

Both they and Wolves were to benefit from the presence of white knights. Steve Gibson became acknowledged as the man who spectacularly transformed Boro while Sir Jack Hayward’s Molineux reign was still in its infancy when the Teessiders won there on the final day of 1991-92 to secure promotion back to the top flight.

Boro held off Wolves’ challenge to prevail again in 1994-95; now the roles are reversed and the Riverside is staging only Championship football – mid-table fare at that.

But hopes were sky-high 30 years ago this year when the clubs met with Wembley only two hops away.

John Neal’s Boro were drawn at home and considered warm favourites as they were several places higher in the League and had sent Wolves away empty-handed on the back of a 2-0 defeat a few months earlier. They had also won nine home games in a row, including Albion in an earlier Cup round. 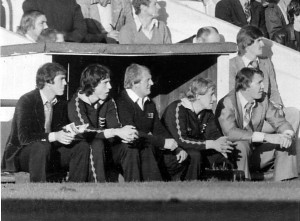 John Barnwell and Richie Barker - an impressive Molineux think-tank - are joined on the bench by (from left) Billy Rafferty, Colin Brazier and physio John Malam.

The build-up was far from satisfactory for the visitors, manager John Barnwell tripping over some wire at Castlecroft on the Friday, banging his head on a brick and at the same time suffering a suspected fracture of his knee-cap.

He was at New Cross Hospital having x-rays while his players boarded the coach but defied doctor’s orders to be chauffeur-driven to the north-east on the morning of Saturday, March 7.

The performance of his side lifted him no end as Wolves, skippered by John Richards, went in front through Andy Gray’s header from Mel Eves’s eighth minute cross.

Although Terry Cochrane equalised just before the half-hour, it proved to be another of the sterling cup displays of the Barnwell-Barker era – one that was continued in the replay three nights later.

At Molineux, Wayne Clarke hit the bar then the inside of the post early on while Kenny Hibbitt’s effort was touched on to the woodwork by Jim Platt.

Eves broke through with a stooping header and, even after David Hodgson nodded a late leveller, Wolves dug deep to win it 3-1 in extra-time with goals by Richards and substitute Norman Bell. 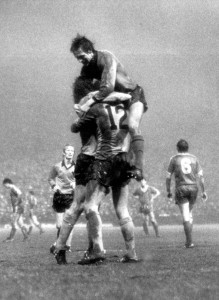 A happy ending - for now - as Wolves celebrate extra-time victory over Boro 30 years ago.

They were through to their 13th Cup semi-final while Boro considered themselves jinxed, having failed for the fifth time out of five at the quarter-final stage – on each occasion having had a home game in the tie.

What they couldn’t have foreseen through a double-header watched by almost 77,000 spectators was the impending nightmare. Nor, give or take a few tell-tale signs of corners being cut, could Wolves.