Matt On His Growing CV

Matt Murray was in the Sky Sports studio yesterday, providing expert articulate analysis on QPR’s Championship draw with Hull. Here, he gives his answers to the second batch of the questions posed by our readers. 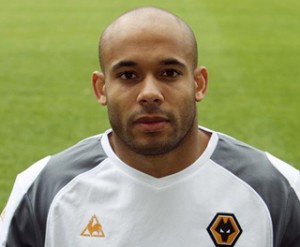 Q: As someone who has seen it all at first hand, what do you think Wolves can and will achieve over the coming years? (From WolvesAreBoringOnCeefax)

A: I definitely feel they will stay up this year. It is still basically the team we got promoted with. There have been signings but they don’t all play. I think we’re getting more experienced and adjusted to the Premier League. With the stability we have in the club, and the backing from the chairman, we could become similar to Bolton – an established, steady Premiership team. I believe we can do that and that’s why I’m so gutted about being injured and not being involved. I keep thinking I could be part of that. It’s frustrating. I know people say nice things about me but I still wish I could have fulfilled my potential.

Q: Would you like to have played for any other team in your career? (From JW)

A: I would have been happy as a one-club player at Wolves. But, as my step-dad was an Everton supporter, it would have been nice to have played for them at some stage. And, also, anyone would be delighted to get a chance to play for a team like Manchester United or Real Madrid.

Q: Why do you think goalkeepers don’t seem to go on to be managers? (From A Wanderer From Bristol)

A: I really don’t know. Some of it has to do with percentages. There are a lot more outfield players than goalkeepers. That lowers the odds for us. I was asked the other day if being a young black coach in the game might hold me back. My answer was ‘no’ but the fact I’m a keeper worries me more. You worry that you could be pigeon-holed into just being a goalkeeping coach. There are a few more keepers taking coaching qualifications nowadays. I’ve got my level 2 coaching qualification, I’m doing level 3 goalkeeping and outfield in the summer, so that will be UEFA B level, then there’s the final qualification the year after. I’ll then see how it goes and, if I’m enjoying it, I can go for my pro licence.

Q: Have you given Carl Ikeme any advice or support in his similarly injury-ravaged career – perhaps telling him where you may have gone wrong in your fitness regime? (From Dewsburywolf)

Q: Are any of Carl’s injuries similar to your own? (From wanderer24)

A: Carl actually went four years without injury and he’s having niggling injuries rather than serious ones requiring operations. He had a shoulder operation but then it was a stress fracture in his back. He went out on loan and twisted his ankle. It has been a catalogue of niggles. If you look at Carl, he’s like a finely tuned racehorse and sometimes you wonder if that is why. George Ndah was the same. And so is Matt Jarvis. Yet Wayne Hennessey is different. He hasn’t got the best physique, he doesn’t lift any weights, yet he has played week in week out. Carl and me do all the extra training, all the weights and pilates, and seem to be getting the injuries. Carl isn’t on my level with injuries but I really feel for him because he is a very good goalkeeper.

Q: What are your long-term future plans and will you be still be involved with Wolves in a capacity other than playing. There are tens of thousands of Wolves fans that would love to have you at this club for the rest of your life. (From Pumpking)

Q: Do you have any aspirations of heading into the media? I recall you being a pundit on one of Wolves’ televised games this season and presenting yourself very well. Is it something you’re looking to do more of? (From Rockstar Wolf)

A: I enjoy my TV work with Sky, ESPN and Premier TV. I’m just trying it all and having a go. Hopefully, people like me but, again, because I’m a goalkeeper and because I didn’t play as many games as I would have liked, you worry if your opinions carry any weight. Do people want to listen to a goalkeeper? Apart from Schmeichel, there’s no other goalkeeper doing much TV work.

Q: Is management something you fancy in the future? (A Wanderer From Bristol)

A: I want to have as many strings to my bow as possible. I’m enjoying my coaching at the moment and love working with the kids. I need to get more experience and make my sessions flowing better. As a player, you just go and take part in a training session. As a coach, you need to plan and work out the purpose of the session. I would take the opportunity to become a manager if I had it. Before, I didn’t think I would but I think I could handle it in the right way now. Being a manager is something I’m definitely interested in.

Q: I understand you have become quite involved with the Alzheimer’s Society. I’ll declare an interest….my brother works for them and I feel very supportive. How did you become involved? (From A Wanderer from Bristol)

A: With my testimonial, I’m involved with four charities and Alzheimers is one because of Bert Williams. He’s a legend and such a top man. Bert has done so much for me. 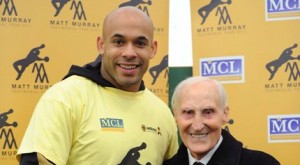 Q: How did your bond with Bert come about? (From Boss Hogg)

A: I saw him around at matches and he always took an interest in me. I did interviews with him and we just became friends. It was interesting listening to him. He gave me advice and told me things about his playing days. Bert’s just a really nice man. He’d give me a call every now and then to tell me he thought I’d played well that day. He encouraged me and, when I was injured, he would ring me and wish me all the best. I supported some of his charity events and we just became friends from that. He’s a great bloke, 91 and fit as a fiddle.

Q: Have the club helped to prepare you for life outside football should you decide to take that route? (From MonkeySpanner)

A: Wolves are a very special club and, in my opinion, a dying breed in the game. They couldn’t have been more helpful. They have stood by me during my injuries – some clubs would have got rid long before. They got me the best treatment and paid me up for the rest of my contract, even though they didn’t need to. They have given me the ambassador role on the Community Trust, I’m doing some coaching with the kids and they have said there’s a position for me later if I want. I can’t ask for any more. They have been different class. Just another little thing I’d like to mention…..as an example of the type of club Wolves are, at Dean Richards’ funeral, there were 19 people from Wolves, 16 of them ex-players. It was a brilliant turn-out and shows what a family club they are.

Q: Matt, do you and the Wolves players read some of the rubbish we all post on fans forums in general and Molineux Mix in particular – because we all know how to run a football club better than anyone! (From Pumpking)

A: Yes, of course players follow them. Everybody wants to be popular and sometimes fans are fickle and things are said in the heat of the moment. But I think our fans will be one of the reasons we will get out of this relegation battle. They are all behind us. Everyone is entitled to an opinion. What annoys players is when fans say the players aren’t bothered. That’s not the case. They are bothered. They are only human and do have off-days but they never go out there and not try.

Q: And what have you got coming up for your testimonial year? (From JR)

A: Well, I’ve got a sports forum with you in May, John, and a golf day at The Belfry. We’re planning a dinner with all the players who were involved in the play-off final – that should be a great evening. And we are finalising details for a game during the October international weekend, either the 8th or 9th.

* Matt is also an ambassador for the Wolves Community Trust and is this year taking over from John Richards as Patron of New Cross Hospital Kidney Patients Association.