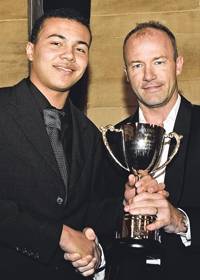 Another Streete is branching out into professional football – hopefully one destined for the road to the top.

Not that Midlands audiences are seeing much of him as yet. His stage 200-plus miles away sees to that.

But Remie Streete is making encouraging noises in the youth and reserve teams at Newcastle.

The 16-year-old has already had the thrill of a meeting with Alan Shearer after being named last year as Sport Newcastle’s most promising youngster.

And it was a pertinent occasion as it was the first awarding of a prize offered in the name of Jack Hixon, the North East-based scout whose many discoveries are headed by Shearer himself.

“Remie is a central defender like me and pretty tall at 6ft 1in,” said his father Floyd, the late 1980s Molineux favourite. “But I’d imagine he still has some growing to do because he’s slim.

“He is in Newcastle’s under-18 side and has played three or four games in the reserves. I have watched him a couple of times – in the FA Youth Cup ties against Grimsby at St James’s Park and Manchester United at Gateshead.

“I liked what I saw and we hope he has an exciting future in the game. He lives in South Shields, so Newcastle are his home-city club and he has been there since he was 13 or 14.

“Sunderland were interested in him at the time and one or two other clubs are looking now. He is in negotiations over a new contract and has been offered a deal for three or four years, so we’ll have to see what happens.”

Floyd Snr, who turns 52 next week, is now back living in Aylesbury after spending three and a half years in the Cayman Islands, where he was involved in a fitness studio and coaching.

Floyd in action more than two decades ago.

He plans to set up a soccer school later in the year and is hoping for an immediate Wolves recovery in the Premier League survival scramble.

The last of his 194 games for the club was at Stoke in February, 1990, and the outcome of this week’s meeting of the old Staffordshire rivals leaves him sweating.

“I just hope Mick and the boys do it,” he added. “Being at Molineux was a magical time in my life and I would hate to see Wolves relegated.”