All Systems Go For Top Flight 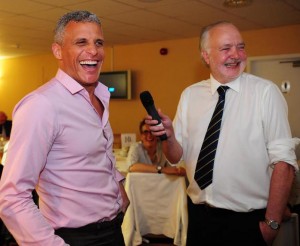 Keith Curle has emerged from QPR’s Championship-winning celebrations to speak up for the ‘managerial mentoring’ that one of his former Wolves team-mates is currently benefitting from.

The former Molineux captain is a long-time assistant to serial promotion winner Neil Warnock and, FA enquiries permitting, is relishing the prospect of pitting his wits on Premier League touchlines next season.

But, as Norwich and Cardiff prepare to continue their scrap for second place later today, he has voiced the opinion that clubs should not overlook the value of experience.

“Dougie Freedman, who I played alongside at Wolves, is new to management and has Lennie Lawrence as a guiding hand behind him at Crystal Palace,” Curle said.

“I know he’s finding it a good arrangement but there are others out there who could do a similar job.

“Colin Lee is out of the game now and may not want all the hassles that come with being a manager. But he would have so much knowledge to offer someone who is perhaps in his first management job.”

Another of the major influences on Curle’s career was Bobby Gould, who groomed him at Bristol Rovers and then signed him for Wimbledon.

“Bobby could do that mentoring brilliantly,” the 47-old former defender added. “He has seen it all and done it all, at international level as well as with loads of clubs, and has so much advice to pass on. 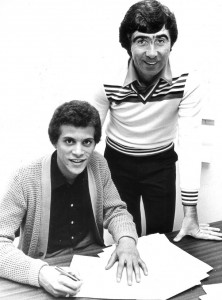 Signing on the dotted line for Bristol Rovers, watched by Bobby Gould.

“He was my boss at Rovers and was a brilliant man-manager. But he had the good sense at Wimbledon to realise he needed a top coach, so he went and appointed Don Howe.”

Curle was initially a winger at Eastville but lost his place to the emerging Ian Holloway, a close mate and contemporary who was best man at his first wedding.

He was subsequently converted by Terry Cooper to a defender at Bristol City and won a promotion there to stand alongside the one he now has on his coaching CV.

It’s enlightening to recall that the £2.5m Manchester City paid for him in 1991 was then a club record outlay! It was also the joint highest fee paid by any British club for a defender.

Three senior England caps, all under Graham Taylor, followed before a £650,000 transfer brought him to Mark McGhee’s Wolves in 1996.

“I had four years at Molineux and loved it,” he said. “It’s a huge club with a great infrastructure and fantastic support and, although we got to the semi-final of the FA Cup in 1998, we just kept missing out on promotion.”

Curle linked up with Warnock at Sheffield United as player-coach and spent almost two years at Bramall Lane, learning some of the new arts that would see him installed as player-manager at Mansfield and then boss at Chester and head coach at Torquay.

His reunion with Warnock came initially at Crystal Palace but he remains resident largely in Sheffield, where his partner Germaine lives and runs a fitness business.

Curle has an apartment in London but hopes to be making a return visit to Wolverhampton next season on Premier League business.