Happy Memories Ahead Of Derby Crunch

By way of a scene setter for Sunday’s crucial Black Country derby, we look back at some inspiring Wolves conquests in the fixture. If these recollections don’t raise Molineux hopes, nothing will! 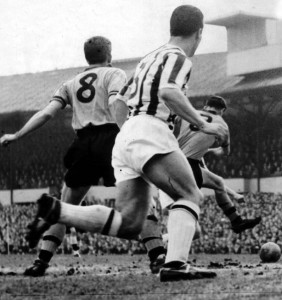 November 14, 1953: Wolves 1 Albion 0 – Jimmy Mullen’s looping left-foot shot proved the difference between two title-chasing sides and Stan Cullis’s men completed a vital double by winning by the same score at The Hawthorns in the April.

February 27, 1960: Wolves 3 Albion 1 – Goals by Jimmy Murray, Norman Deeley and Eddie Clamp gave Wolves another League double over their rivals. It was virtually over at 3-0 after 25 minutes, with Alec Jackson’s second-half effort no more than consolation.

March 16, 1963: Wolves 7 Albion 0 – The Baggies thought they had got away with it when the Boxing Day clash at Molineux was abandoned at half-time because of snow, with them two down. But Wolves ran riot in the re-match through Terry Wharton (3), Barry Stobart (2) and Alan Hinton (2).

November  1, 1969: Wolves 1 Albion 0 – The Match of the Day cameras were present to record Mike O’Grady’s crashing 77th minute winner from outside the area. It was a fitting send-off for Derek Dougan before he served an eight-week ban.

March 20, 1973: Wolves 2 Albion 0 – A goal in each half, by Kenny Hibbitt and John Richards, nudged the side managed by Wolverhampton-born Don Howe towards a relegation trapdoor that eventually swallowed them. 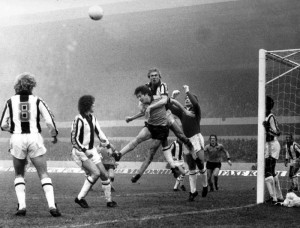 A misty backdrop as John Richards is halted in dubious fashion by Martyn Benett in Wolves' 1981 win over their biggest rivals.

January 31, 1981: Wolves 2 Albion 0 – Late-night BBC viewers witnessed another gold and black triumph, or at least tried to. Through a fog, Mel Eves and Andy Gray struck to give Wolves a first win over Albion in eight years.

March 20, 1990: Wolves 2 Albion 1 – Albion struck first as they sought revenge for an October loss at The Hawthorns but Paul Cook equalised with a low shot, then Steve Bull hit another of his famous Black Country derby deciders.

August 28, 1994: Wolves 2 Albion 0 – Optimism was high in the early months of the Graham Taylor era when Andy Thompson’s successful first-half penalty was followed by a goal from David Kelly after the break.

January 12, 1997: Wolves 2 Albion 0 – Dean Richards’ thundering header set Mark McGhee’s team on the way to a comfortable victory that was sealed when Iwan Roberts headed home later in the first half. It completed another Wolves debut and led to the sacking of Alan Buckley.

March 11, 2007: Wolves 1 Albion 0 – A flashing left-foot drive late on from substitute Jay Bothroyd gave Mick McCarthy’s Wolves a sixth successive victory. It was thrilling stuff – just as home supporters hope it will be this weekend.