How The Title Was Blown 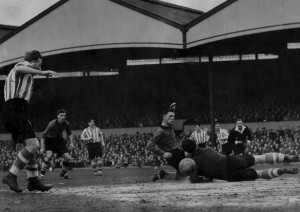 Dennis Westcott on the rampage at Molineux.

It’s one of the sadder parts of Molineux folklore that Wolves spurned the chance to get their hands on the League Championship for the first time when beaten by Liverpool in a thrilling conclusion to the 1946-47 race.

What is less well known, though, is the extent to which they crumbled generally over the closing stretch.

They were a dominant a force for much of the campaign, winning 16 of their first 23 League games, including a 5-1 mauling of then leaders Liverpool, to fully justify the tag Vizard’s Wizards.

Dennis Westcott hit four goals at Anfield that early-December day, did the same at home to Bolton a week later and then saw his side win in his absence at Chelsea next time out after he had missed the train!

Wolves, managed by Ted Vizard, led by 11 points at one stage and appeared to have emerged successfully from the country’s spate of postponements when they came with another scoring rush in the spring.

They beat Derby 7-2, Bolton 3-0 and Chelsea 6-4 in successive games to tighten their grip at the top, Westcott and Jesse Pye totalling four goals apiece in the trio of games.

It seemed only a matter of time until they were assured of finishing as champions, with one pundit predicting that the title would be theirs by April 8 – almost two months before the season ended!

Westcott carried on scoring to become the club’s record marksman in a League campaign with 38 goals but the side were floundering even before he missed the final two matches after being injured against Blackburn, the club he later joined.

They drew at Portsmouth, lost 3-2 at home to Everton 64 years ago today and then took only a point from Blackburn’s visit.

A 1-0 victory at Huddersfield, secured by Johnny Hancocks’ 11th appearance on the score-sheet that season, kept them in the driving seat with one game to play – at home to arch-rivals Liverpool. 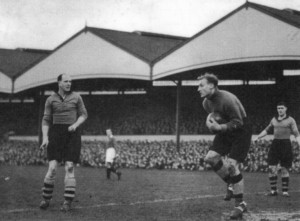 Bert Williams, watched by Stan Cullis and Angus McLean, hangs on in Wolves' 6-4 home win over Chelsea in 1946-47.

And it has been frequently chronicled that the Merseysiders avenged their Anfield humiliation with a victory in what was Stan Cullis’s final match as a player.

Wolves historians talk about the 2-1 defeat as being decisive, as it was in condemning the club to third place behind Manchester United and champions Liverpool, with Stoke in fourth place.

But the crown wasn’t lost only in front of 50,765 spectators on that May afternoon on which the temperature reached 96 degrees. The final five fixtures had yielded a very mediocre four points.