Valley That Yielded A Rich Harvest 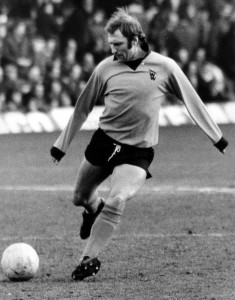 1970s Mike Bailey - a reassuring sight for all Wolves fans.

Where were the seeds for Wolves’ early-1966 swoop for Mike Bailey sewn?

Could it have been as far back as 18 months previously that the wing-half caught the eye of those at Molineux?

Bailey played against Wolves at The Valley in a friendly on August 17, 1964, and made a definite mark in a game that featured an early Peter Knowles goal for the visitors.

The Charlton powerhouse ran through an attempted offside trap to equalise in the 20th minute and produced a contribution that was described by Phil Morgan in his Express & Star match report as ‘intelligent.’

As we recorded nearly a month ago, it was only a few weeks later that the Wisbech-born player – then aged 22 – broke his leg in a cup-tie at Middlesbrough.

Stan Cullis had controversially departed from Molineux in the meantime but maybe word as to Bailey’s impact and potential had been passed along the line to the manager’s successors, Andy Beattie and Ronnie Allen.

In early March, 1966, came the news that Allen had signed the player for only £40,000 in time for a debut at home to Southampton in a 1-1 Second Division draw, the new boy lining up in his trademark right-half position and Ron Flowers switching to centre-half.

Bailey, already capped twice by England, went on to make a colossal 436 senior appearances for Wolves over the next decade and a bit.

Cliff Durandt - moved from Molineux to Charlton in 1963.

So maybe it’s just as well the club chose Second Division Charlton as part of their low-key build-up to 1964-65.

And two other names with strong Molineux connections were on the Londoners’ team-sheet for a fixture they won 3-1.

Cliff Durandt went on as a substitute just before the hour and appeared in the same forward line as Mike Kenning, the winger who was to move to Wolves early in 1968.

Bailey wasn’t the only debutant in the clash with the Saints. David Webb, having impressed for Leyton Orient against Wolves that season, had just arrived at The Dell and took over in defence from the former Molineux reserve Ken Wimshurst. Webb highlighted his first outing in red and white stripes by opening the scoring with an overhead kick but Ernie Hunt soon equalised with a floating header.