‘Home’ Win That Was Perfect Preparation

Forty years ago this month, Wolves were crowned as the inaugural winners of the Texaco Cup. Here, we take a detailed look at their progress, with part two of our lengthy report to follow shortly.

It didn’t have the glamour of the following season’s campaign – and certainly not the same reach – but Wolves’ winning crusade in one of football’s long-neglected competitions might just have been a leg-up to UEFA Cup success.

By popping up to Scotland and over to Northern Ireland, their players became more familiar not only with travelling and living together, but also with the two-leg combat that was largely alien to them.

Wolves hadn’t played home-and-away ties since their early European days in the late 1950s and early 1960s, so the advent of a tournament initially known as the Texaco British Isles Cup presented a new challenge to Bill McGarry’s squad; not least in terms of volume of games.

It didn’t seem to matter to football’s administrators that top-flight clubs were already playing 42 League fixtures, plus as many in the unsponsored FA Cup and League Cup as their progress demanded.

The sport was hungry to expand, so 16 sides (six from England, six from Scotland and four from Ireland) entered a tournament sponsored by Texaco to the tune of £100,000 to help promote the American petrol giant’s recent purchase of the Regent filling station chain.

The net was spread across high-ranking clubs who hadn’t qualified for Europe, with Albion, Burnley, Nottingham Forest, Stoke, Tottenham and Wolves as participants from England, Airdrieonians, Dunfermline, Dundee, Hearts, Morton and Motherwell joining from Scotland and Ards, Derry City, Limerick and Shamrock Rovers from Ireland.

McGarry’s men had started to find some form by the time their opening assignment took them to Dundee in mid-September, slowly turning round their fortunes following an opening run of three League defeats.

They were still flaky enough to lose at Oxford in the League Cup but had won well at Ipswich at the start of September and built on that with draws against Stoke and Chelsea, the latter at Stamford Bridge in Kenny Hibbitt’s first senior start.

And the first trip across the border was particularly eventful for Hibbitt and Frank Munro. 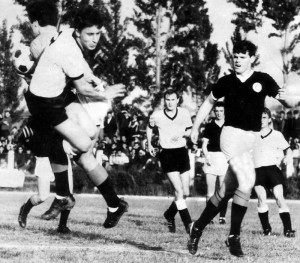 The latter didn’t even make it to Tayside before being hit by misfortune. With his team-mates sat on the coach waiting to go training at Hearts’ Tynecastle ground, he became stuck for 20 minutes in the lift at the team’s Edinburgh hotel.

“It was a bit scary,” Munro said. “I began shouting for help and eventually somebody realised what was wrong and sent for the engineer.”

The match was a special one for the defender. He was from Broughty Ferry, near Dundee, and had hit the winning goal against Wolves’ opponents on his debut for Dundee United.

He had his work cut out on this occasion to quell the threat of a side whose manager John Prentice had talked of building a big lead as insurance for the second leg.

In the event, it was Wolves who swept into a two-goal lead but they had to withstand waves of pressure as Dundee – past semi-finalists in both the European Cup and Fairs Cup – battled to preserve their unbeaten home record in external cup competitionss.

Bobby Gould, recalled for injury victim Hugh Curran on a night when Dave Wagstaffe was sidelined and replaced by Paul Walker, needed only two minutes to drive in the opener right-footed from Phil Parkes’ long kick.

And Jim McCalliog lashed in a left-foot beauty from 25 yards for the second when Derek Dougan fed him six minutes before half-time.

Wolves had Kevin Charlton on their bench due to the rule that stated that goalkeeper substitutions could be made but Parkes was to play throughout their campaign, beating out a Jimmy Wilson free-kick in the build-up to Dundee’s goal – a header by Gordon Wallace – just before the break.

No-one felt the visitors’ discomfort under pressure more than the impressive Hibbitt, who was playing the first of his 108 cup games for the club. He was knocked out when striker Jocky Scott fell on him while he cleared for a corner in the last minute. The midfielder came round in the dressing room afterwards but was sporting a smile as well as ten stitches in his head when pictured in the Express & Star the next day in the interesting combination of collar and tie and fetching Basil Fawlty head bandage.

After the 2-1 win north of the border came high-scoring League victories over Huddersfield and Burnley that confirmed Wolves’ dramatic upturn in form and pointed to a stroll in the second leg. The reality, though, was somewhat different. 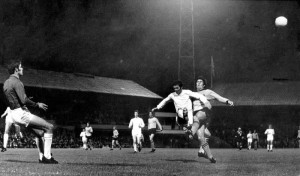 Bobby Gould is shut out as Wolves find Dundee anything but a piece of cake at Molineux. Photo from the Wolves In Pictures book produced in association with the Birmingham Post & Mail.

Dundee were again a tough nut to crack and missed a great chance to level the tie. John Duncan was the guilty man and, like Jim Steele, would shortly step from their side to play in England.

The goalless draw was drab fare overall, although Phil Morgan commented in his considered E & S report on what a ‘jolly frolicsome fellow’ referee Roger Kirkpatrick was.

As a crowd-puller, Wolves’ participation in the tournament had got off to a luke-warm start. Barely 13,000 (more than 10,000 below the League average to that point) were at the second leg 13 days after the first meeting at Dens Park, where the 9,892 attendance was probably affected by the Dundee United v Grasshoppers of Zurich European tie the evening before.

There would have been more empty seats at Molineux had the Morton squad not remained in the West Midlands to take a look at their next opponents after knocking Albion out at The Hawthorns the previous night. 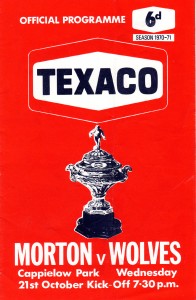 The Scots’ manager Hal Stewart also dropped in on Wolves’ 3-2 mid-October home victory over Newcastle – a useful pointer as it came four days before the opening skirmish in the Texaco Cup second-round tie.

Curran, who had started the season explosively, was now out with a groin problem but Gould had hit a match-winning hat-trick at home to Manchester United and would shortly score twice against Manchester City. Even with Dougan’s season yet to fire and John Richards still a pup, the goals were flowing again in the side.

The pairing with Morton meant Wolves this time headed for Scotland’s west coast, doing so without Glasgow-born Danny Hegan, who had a sore hip as a result of a reserve game at Preston in which Munro impressively proved his fitness following two games out with a head injury.

Munro was preferred to John Holsgrove – strongly linked at the time with Albion – while John Oldfield replaced Charlton as reserve keeper for an October 21 clash which would bring Wolves into opposition with the former Leeds and Everton inside-forward Bobby Collins.

The squad stayed in Ayrshire at what was described as a Clydeside version of Lilleshall Hall, the tournament now having apparently had the ‘British Isles’ bit taken from its name and become known simply as the Texaco Cup.

Whatever the title, Wolves were largely untroubled at Cappielow Park, where they were two up in 25 minutes. Gould flicked home the first goal when Dougan nodded down McCalliog’s cross, then The Doog himself nodded in Wagstaffe’s left-wing centre. 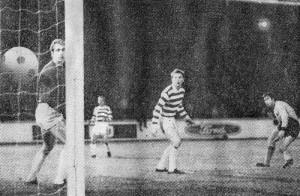 Wolves were outstanding on the break, Gould flashing in a header to Wagstaffe’s cross to wrap up a 3-0 victory and Bernard Shaw threatening a fourth when he played a one-two with McCalliog and hit the far post before lifting the rebound over.

In his reprinted recent autobiography, 24 Carat Gould, he wrote: “We grew to enjoy those trips to Scotland. I liked the Texaco Cup and was delighted to score a couple at Morton in a game watched by my Granddad Bob Morton. Yep, they had the same name.

“He joined me in the players’ bar afterwards and got so engrossed in conversation with the lads that he missed his last train back into Glasgow. Bill McGarry must have mellowed with our victory because he agreed to him having a lift into the city and even gave him a seat at the front.”

Maybe Wolves had one eye on a looming derby date with Albion when they contested the second leg on Tuesday, November 3. Again, they were less convincing at home than away and flirted with major embarrassment.

Gerry Sweeney, later to pop up as Walsall assistant manager, took advantage of poor defending to slam in Morton’s opener mid-way through the first half and more complacency allowed centre-forward Campbell to hit the second in off the under side of the bar on the hour.

Wolves had managed some decent spells of pressure and seen McCalliog’s effort cleared off the line. But they were grateful when Curran stepped from the bench for his first senior action since September 19 and marked his return with a headed goal from Mike Bailey’s 67th minute cross.

With breathing space restored, they overcame a defeat on the night to go through 4-2 on aggregate and were to head off next in a different direction.

Part Two of this article, focusing on the semi-final and final, will follow shortly.