Doog Caps Still Up For Grabs 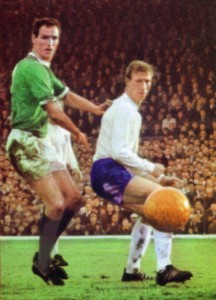 Two of Derek Dougan’s international caps will go back up for sale later this year after they failed to sell at Sotheby’s last week.

Bidding came in fractionally below the £800 reserve price when the items were put up by Graham Budd Auctions in London.

They will now be offered at a revised price when the company stage their next sale in November.

One of the caps related to The Doog’s travels with Northern Ireland in 1971-72 – made while he was at his peak with Wolves.

He played five times for his country that season – home and away against the USSR in European Nations Cup qualifiers – and against England, Scotland and Wales in the Home International Championship.

He led the Molineux goal charts that season with 24 and is said to have celebrated suitably with his club and country colleague Danny Hegan when flying out to join Wolves’ players on tour in the United States soon after the Irish’s famous 1-0 victory over England at Wembley on May 23, 1972.

The other cap relates to Dougan’s 1960-61 international appearances during his time with Sunday’s Molineux visitors Blackburn.

Twenty-six of the late forward’s 43 senior Northern Ireland games were played while he was at Wolves, the last of them against Cyprus in 1972-73. He scored eight times for the side.

A lot of value for Doog fans.

Caps, however, were not awarded by his country on the basis of one per appearance. They tended to cover a season’s service, so the sale items relate to all the internationals he played in during 1960-61 and 1971-72 respectively.

Robbie Dennison (18) is second in the list of players to have won the most Northern Ireland caps while with Wolves.