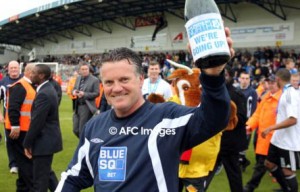 Job done! Andy Sinton is the toast of the town. Photo courtesy of James Baylis/AFC Images.

Andy Sinton has described taking AFC Telford into the elite of non-League football as rivalling England recognition and a League Cup winners’ medal in his list of career achievements.

Following five years in charge at Fleet Town, Sinton switched last summer to the New Bucks Head and has led the club to second place and then victory in the Blue Square Bet North play-offs.

They trailed Guiseley on aggregate with 11 minutes left before scoring twice in front of an ecstatic 5,436 crowd.

“I’m sure people thought I was stupid or insane but I believed we could get out of this league,” said the 45-year-old, whose 82-game spell at Wolves ended in 2002.

“It’s absolutely fantastic. I have represented my country and won the Worthington Cup at Wembley with Tottenham. But, when you are the head of the  ship, you have to make every decision, so this is probably the greatest moment of my career.”

Vince Bartram has been celebrating promotion even before Bournemouth set foot on the Galpharm Stadium turf for their play-off semi-final second leg at Huddersfield tonight.

And there’s a good reason. The former Wolves reserve switched allegiances from Dean Court this season and is now Southampton’s goalkeeper coach at first-team and Academy levels.

“I’ve done the lot round here now – Bournemouth, Portsmouth and the Saints,” Bartram said. “I’m full time and I love it.” 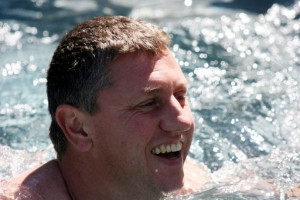 Vince Bartram - still finding the Solent very much to his liking.

The 42-year-old, who played ten first-team games while at Molineux in the 1980s and early 1990s, was taken on for only two mornings a week at the Cherries, where he worked under current Tottenham coach Kevin Bond.

One of his tasks at League One runners-up Southampton might be to warn the likes of Kelvin Davis and Bartosz Bialkowski of the danger of low-flying objects.

Bartram, then with Gillingham, had to retire in February, 2004, with a wrist injury bizarrely suffered in a collision with Tony Warner when the opposition keeper ventured up-field for a last-minute corner.

The game kicks off at 7.30pm and is in aid of SANDS, the Stillbirth and Neo-natal Death charity. Donations can also be made at www.justgiving.com/Daniel-Mole