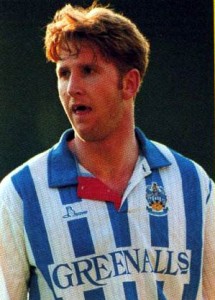 Iwan Roberts in his Huddersfield days.

Iwan Roberts’ place in history as the ultimate Huddersfield Town ‘marathon man’ is safe – despite his old club’s march to a play-off final meeting with Darren Ferguson’s Peterborough.

Terriers skipper Peter Clarke will be playing his 59th game of the season when he leads them out at Old Trafford a week on Sunday with a place in the Championship at stake.

But that’s still two matches below the club record 61 appearances Roberts – later of Wolves – managed in blue and white stripes in 1991-92.

The striker scored 68 goals in 182 games while at Leeds Road, although his valuation surprisingly appeared to fall in the process.

Roberts played 38 of the 51 games Wolves played in his sole season at Molineux (1996-97), although ten of those outings were as a substitute.

His 12 goals in Mark McGhee’s side included a match-winning early-season hat-trick against Albion at The Hawthorns.

He subsequently went on to become one of the heaviest goalscorers in Norwich history and admitted in his autobiography ‘All I Want For Christmas’ that he doesn’t look back on his Molineux time with particular fondness. 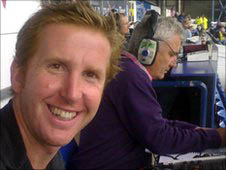 But the record holder for most Wanderers appearances in a season is keeper Phil Parkes, who played 59 times out of 59 in 1972-73.

Roberts now works in the media, covering football for BBC and Sky Sports and demonstrating his fluency in Welsh.