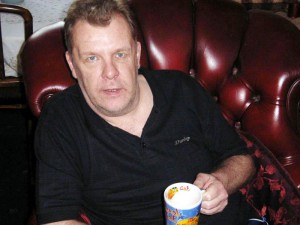 Paul Bradshaw - a foot in both camps.

Norman Bell, Paul Bradshaw, Graham Hawkins, Ken Knighton, David Wagstaffe…the sighs of relief after the dramatic events at Molineux this afternoon are to be heard in various corners of England!

Not only do Wolves live to fight for a third season in the Premier League but their last-day visitors Blackburn – also served by the quintet above – finish on the right side of the dotted line as well.

“What a relief!” said Bell, who lives and works in Blackburn and had two and a half seasons at Ewood Park in the early 1980s following his 100-match spell with Wolves.

“I was thinking of going to the game, then thought it would be a miserable place for me to be if either of the clubs went down. It was nervy but we got what both sets of fans wanted, so it has all worked out well.”

Knighton had already seen one of his former clubs (Preston) relegated this spring but was thrilled that two others had survived at the highest level.

“I’m absolutely delighted,” he said. “Wolves always mean so much to me as my first club and I would hate to have seen them go down. On top of that, I think Mick McCarthy is a first-class bloke.

“I remember when I was youth coach at Sheffield Wednesday and he was playing in Barnsley’s youth team, probably as a 17-year-old. He was outstanding. Now I love him for his honesty and his sense of humour.

“After playing for Wolves, I also had a couple of years at Rovers, so this is almost the perfect outcome for me.

“I say ‘almost’ because ideally I would like to have seen Blackpool survive as well. They have been terrific all season and came for me when I was a Preston player but the move broke down and I joined Blackburn instead.”

Among the many other players to have served Wolves and Blackburn are Alan Ainscow, Mark Atkins, Chris Crowe, Derek Dougan, Tim Flowers, Freddie Goodwin and Dennis Westcott while Keith Andrews was among Rovers’ substitutes on Sunday. 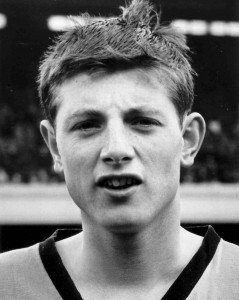 Freddie Goodwin, the former Wolves kid who was at Blackburn for more than a year and a half from March, 1970.

There has even been a big cross-over between the clubs on the sidelines and in the corridors of power.

Bobby Downes, Robert Kelly, Ian Miller and Sammy Chung have coached or scouted at both and the former Wolves secretary Tom Finn has filled the same role or that of MD at Ewood for a decade and a half.

He was present this afternoon but, for Les Wilson, it was again a case of long-distance viewing as he watched on TV in Vancouver while the drama unfolded.

Les emailed Wolves Heroes after the matches with the message: “What a truly great climax to a great season.  It could not have worked out any better for me – Wolves stay up by the skin of their teeth, Manchester United are Premier League champions and Norwich City win promotion.”