A Sort Of Last Word 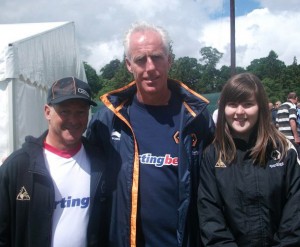 Mick McCarthy - will be even more popular now.

* For all the talk that this might prove a historic season in terms of a team going down with a record high points total, the magical target of 40 finally proved enough. Just!

* Mick McCarthy said after the barely satisfactory home draw against Fulham last month: “This might just be the point that keeps us up.” Wolves, in 17th place, finished one place and one point above Birmingham.

* McCarthy might well have thought the same following the 1-1 stalemate at St Andrew’s on May 1. But we can now look back to Molineux in mid-December and possibly regard Stephen Hunt’s 45th minute winner against Blues as a £50m goal.

* After 14 League games, Wolves were one point off the bottom with nine points from 14 games. Blues were 13th with 16 points, a vastly superior goals difference and a much better ‘goals scored’ record. We should never give up!

* There’s nothing like a day out at Wembley for the underdog, is there? WRONG! Blues have followed up their Carling Cup triumph by winning two, drawing three and losing seven of their remaining 12 League matches. Bolton’s FA Cup semi-final appearance was followed by a League record of one win and five defeats from six games and Stoke have finished with two defeats out of two since losing in the FA Cup final. Is it worth all the fall-out?

* We thought the mid-1980s were horrific when Wolves went down three times in three successive seasons. I heard after the final whistle at Molineux on Sunday that Wolves were actually going down three times in around 45 minutes. Unless there has been a spectacular overhaul of the rules and regulations, that just isn’t possible. What has changed in recent times, thanks to the likes of the BBC and Sky Sports, is that we now see tables updated during play as goals go in. 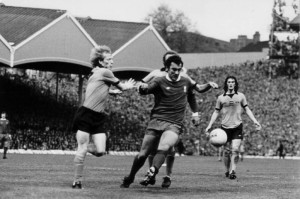 Tense times as Willie Carr and Mike Bailey challenge Ray Kennedy in 1976 in front of a Molineux full house of 48,918.

* Remember May, 1976 and the home game with Liverpool that was described in big letters on the front cover of the Molineux programme as ‘The Great First Division Drama’? Wolves scored first, then conceded three and went down. On Sunday, they conceded three, then started scoring themselves and stopped up. And who pushed them down as they drew at Sheffield United on the same night 35 years ago but Birmingham?

* In the build-up to the May 8 derby with Albion, Mick McCarthy said it straight: “We’re not going down.” How many of us believed him? At that stage (on the Friday afternoon), Wolves were five points behind Blues with three games left and had a much inferior goal difference. Blackpool’s draw at Tottenham next day barely raised our hopes either.