That’s What You Call A FREE Signing 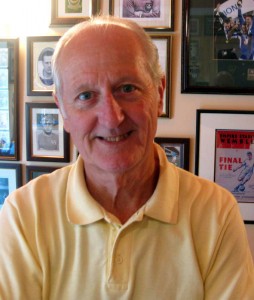 Pat Neil pictured at a friend's last week - in front of a programme of the Portsmouth v Wolves FA Cup final programme of 1939.

He played First Division football for two clubs while still a sixth former and had one of his call-ups announced at morning assembly.

He also scored the goal that preserved Wolves’ unbeaten floodlit record at Molineux and went on to make four League appearances for the club (scoring once) without taking a penny piece in wages. Get the idea we’re talking about someone unusual here? He even became a headmaster!

Pat Neil, a skilful 1950s winger, is now 73 and looks back fondly at a career in which he defied virtually all recognised conventions. Well, how many players would do their homework on the train up from the south coast and then go and pull on the famous gold shirt?

“I was at grammar school all week before going to Wolverhampton on the 3.10 train from Portsmouth,” he said. “Initially, I would stay over at the Molineux Hotel on a Friday night with Mr and Mrs Farr. Then, as long as it hadn’t been an away game up north, I came home on the Saturday night via Waterloo.

“I played in the England schoolboys team at 15 and had Bobby Charlton and Wilf McGuinness as team-mates at one stage. At the end of the season, Stan Cullis came looking for me because Wolves and Manchester United were the two big clubs scooping up talented lads at that time.

“He knocked on our front door in Portsmouth when Wolves were playing down south but I wasn’t allowed in on the meeting! We lived above an off licence my father ran and he told Mr Cullis while I was in another room that he was very keen that I finished my O Levels before thinking about football.

“Stan came back to sign me in 1956 and I recall him being very particular. He took his trilby off when he came into the house.

“I had to talk the matter over with my headmaster because the school were a bit bemused by it all. So was I. It caused a bit of a furore at Pompey as well because they were upset and complained to the FA that Wolves had poached me.

“There was much angst round here, not least because I had good friends at Pompey like Ray Crawford.”

Neil, an England amateur international, had broken into the senior side at Fratton Park on the first day of 1955-56 as their youngest ever first-team player, aged 17 years and 300 days. Ironically, given his classroom commitments, the game fell during school holidays.

He subsequently became Portsmouth’s youngest ever goalscorer and might have made his home debut against Wolves. In the event, he watched that midweek meeting from the stand but played the Saturdays before and after, against Huddersfield away and Blackpool at home, then lined up in a 3-1 defeat in the early-season return at Molineux.

The game against the Seasiders was an attractive one for the nation’s photographers, who clamoured for a picture of him (the First Division’s youngest player) with the legendary and then 40-year-old Stanley Matthews. Pat celebrated the rise to stardom with a goal in a 3-3 draw.

The following Saturday, he impressed in one of Pompey’s most famous victories when they travelled to win 5-1 at Chelsea, who had beaten they and Wolves to the title a few months earlier. He didn’t score – Jackie Henderson did net one – but was on target against Bolton in another 3-3 draw and came up with the only goal against Everton shortly afterwards.

Only a call-up for an amateur international in which he scored twice then denied him an outing in a win at Arsenal.

It was a highly encouraging baptism and, just over a year later, he was doing something similar in the West Midlands.

“Because I was an amateur, there was no fee when I moved to Wolves,” he added. “They just took over my registration in 1956-57.

“I was in digs in Tettenhall with the South African winger Cliff Durandt. We lived in the next street to Billy Wright and used to collect Eddie Stuart and Des Horne on the way to catching the bus up to the ground.

“My first match in the reserves was at Barnsley and I was thrilled over the following months to be playing at some terrific grounds against some great players. But it was Saturday games only until I had this shock call to play against the Hungarian team Red Banner late in 1956. 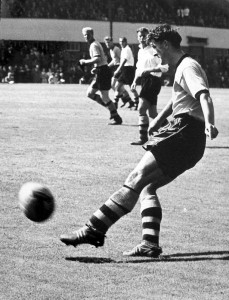 Pat in action in the Colours v Whites game at Molineux, with the likes of Bobby Mason, Ron Flowers and Bill Slater in the background.

“It was a coincidence because Red Banner had played at Pompey the week before and I had gone in quietly with my father and watched from behind the goal. I had also been very impressed with them.

“I had never played under floodlights before that night at Molineux and was lucky enough to score our equaliser when the keeper palmed a corner out to me and I hit it straight back in. I have a picture of it somewhere in my scrapbooks.

“Red Banner had some world-famous players like Hidgekuti, Sandor and Palotas and it was a dreamland for me. We kept our unbeaten record at home to foreign clubs by drawing 1-1 and that was seen as terribly important.

“My first League game for Wolves was at Manchester City the weekend after. Bert Trautmann was making his comeback following his broken neck and all the publicity was about him rather than me playing on Wolves’ left wing in place of Jimmy Mullen, who was the nicest man I have ever met. We won 3-2 and I scored the winning goal.

“I remember going into the school library on the Monday, opening up the huge broadsheet version of The Times and reading a beautiful piece by Geoffrey Green, who I knew from amateur internationals.

“I loved my time at Wolves and was so flattered to be among players like Jimmy, who sold me my first tennis racket when he had his sports shop in the town, Dennis Wilshaw, Eddie Clamp, who was a bit of a rascal, Johnny Hancocks, Billy and Bert Williams.

“Stan Cullis was such a big figure in the game, frightening at times and kindly at others. I remember him giving even Billy Wright a fearful rollocking at half-time in one game for not marking the centre-forward properly. I was sitting quivering in the corner, hoping he wouldn’t come to me!”

Neil, having played nine competitive first-team games for his home city club, played four League matches in a row for Wolves, also facing Blackpool at home and Charlton and Everton away.

He might have squeezed in one more appearance before Mullen’s New Year’s Day return at Sunderland but the weather intervened. Having turned out in a poorly attended morning clash at The Valley in Wolves’ last Christmas Day fixture, he was due to line up in the return the following day as well, only for heavy snow to cause a postponement.

The thumbs-down from the referee came an hour and a half before the scheduled kick-off, late enough for Neil to recall the two teams having lunch together in a town centre hotel. Who knows how many more matches he might have racked up had he not had the likes of Mullen, Harry Hooper and Norman Deeley as competition….. 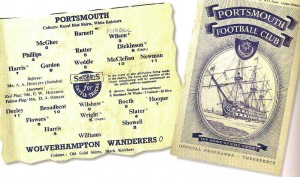 Artifacts from Pompey-Wolves combat in the 1950s.

He had been an infant during the war but the continued fall-out from the hostilities now had an impact on a football career that was already highly unusual.

“My call-up papers came in November, 1957, so I played the first part of that season elsewhere than in the first team and was then posted to Exeter,” he added.

“I think my time at Molineux had run out. I played a lot in the reserves and might have had a cushy number at Cosford if I had been a full-time member of the Wolves staff.

“I still turned out for Wolves in the A and B teams when I was on leave but I drifted away from Molineux and lost contact with them when I was stationed in Cyprus, where I saw active service. I was a foot soldier in the infantry and, although I was captain of the battalion, it didn’t spare me guard duty as we fought to keep the Greeks and Turks apart.

“I had already booked my place at Cambridge University and left the Army after two years with the Royal Berkshire Regiment to read modern languages at Queens’ College. I played three times in the Varsity match at Wembley, with Malcolm Allison as the coach for the last couple of years after succeeding Tony Marchi.

“I was going to go straight into teaching but freedom of contract came in and the Portsmouth manager George Smith persuaded me to go back there in 1962, this time as a professional when they were in the Second Division. I think I was the first Cambridge Blue to become a pro footballer.

“At the same time, I did some part-time teaching at the school where I had been head boy, Portsmouth Northern Grammar. I spent four afternoons a week, Monday to Thursday, in the classroom, leaving mornings for training and Fridays in case we had to travel.

“I only briefly got back into the side, though – for one League game against Derby and the second replay of an FA Cup tie against Coventry, which we lost at White Hart Lane.

“There were a lot of distractions. I had an injury, I was getting married, I knew I was going to be a teacher who played some football, rather than the other way around, and 1962-63 was a season which seemed to go on forever because of the bad weather.

“I decided the combination of jobs wasn’t for me and went to play in the Southern League for Bath City, who Malcolm Allison had now joined. I later played for Cambridge City and Poole Town and had spent five years after Wolves with the famous amateur side Pegasus, which was drawn from graduates of Oxford and Cambridge Universities.”

His farewell to League football having come at only 25, Neil had the outstanding career in education that he had dreamed of.

Fluent in French and Spanish, he went back to teach for eight years at his old school, then switched to a local comprehensive before moving to a middle school in Midhurst, West Sussex, and becoming a deputy head for seven years and a head for ten.

He and his wife of 48 years now live in Waterlooville, just outside Portsmouth, from where he is actively involved in the Pompey Former Players Association – and still in love with Wolves.