Hitting The Heights – And The Wall 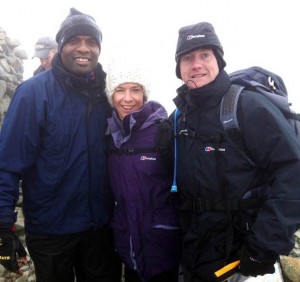 Simon Dunkley (left), with his wife Emma and her cousin Nathan Pilsbury.

Two former Wolves players are tending their aches and pains – and even contemplating new tests of endurance – after completing the arduous Three Peaks Challenge.

Dale Rudge and Simon Dunkley were part of a 14-strong group who climbed the three highest mountains in Scotland, England and Wales, one straight after the other, over the Bank Holiday.

They were disappointed not to achieve their 24-hour time target but have the consolation of knowing they are raising handsome sums for charity.

“We had some problems that slowed us down, like the Bank Holiday traffic and a couple of injuries,” said Dunkley, who was a Molineux apprentice for two years before being released in 1984.

“Two of the girls only managed the first climb – one because of terrible blisters on her feet and the other with a groin injury.

“The combination of those setbacks and the fact that we were all descending Ben Nevis in pitch black, all 4,409ft of it, made it slow going.

“We might still have made up the time but spent much longer travelling between the locations than we expected to because of delays on the roads.”

The ‘When You Wish Upon A Star’ charity hopes to benefit to the tune of around £2,500 from the marathon effort, which was severely challenged by snow and temperatures of minus 15 degrees at the top of Ben Nevis. 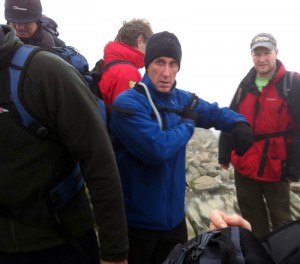 Rudge, who played 29 senior games for his home-town club Wolves in the early 1980s, was going through the pain barrier for the Cardiac Risk In The Young charity.

“I thought I would feel worse than I did,” he said. “I was okay and think I did better than the others with sleep on the journeys in between the mountains because I found a space at the back of the van to lie down on the rucksacks. If only I’d shown that sort of awareness as a footballer!

“It felt very worthwhile despite one or two low points and, having had some decent sleep since I got home, I plan to do something similar fairly soon – maybe even later this year.”

Dudley-born Dunkley, 45, was joined by his wife and brother as well as several colleagues from Dixon’s Estate Agents, for whom he works as a regional sales manager in Birmingham.

He appeared more than a decade ago on the TV reality endurance show Survivor – a forerunner to I’m A Celebrity, Get Me Out Of Here – and still plays for Wolves All Stars.

He also cycled from John O’Groats to Lands End in 2007 to raise money for vital medication for his illness-stricken big mate and former Wolves colleague Ian Cartwright. 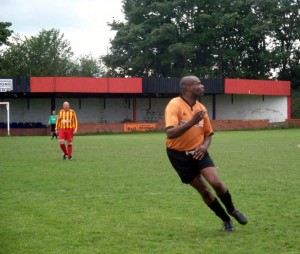 Dunkley on Wolves All Stars duty.

His football career, having progressed no further than a single appearance in the reserves at Molineux, also took him to Stoke and around the local non-League circuit to the likes of Halesowen Town, Bilston, Dudley, Lye and Stourbridge.

When You Wish Upon A Star realises dreams for children with life-threatening illnesses. You can support them through the weekend Three Peaks Challenge by clicking on to http://www.justgiving.com/simon-dunkley1