Nixon Happy To Turn Back Clock 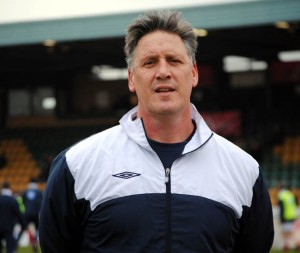 Don’t expect Eric Nixon to be struck down by nerves when he pulls on Wolves’ colours again this weekend.

The man who made history around his 1986-87 Molineux loan stay by becoming the first footballer to play in all four divisions of the Football League in the same season is as near to match-sharp as a 48-year-old can be!

At the end of May, he played in veterans’ matches at Eastlands, Goodison Park and Old Trafford and was until last week working as goalkeeper coach at Blue Square Bet Premier League club Fleetwood.

“I’ve also had a few days at Centerparcs, so I’m ready to go,” said Nixon, who plays for Wolves in a four-team mini-tournament also featuring Aston Villa, Birmingham and Coventry at the Grass Roots Football Show at the NEC.

“I played for them alongside Bully, Andy Thompson, Paul Cook and Don Goodman in the Masters a few years ago and we had a good run before losing to Liverpool.

“This is a smaller version, seven and a half minutes each way and with fewer players, but it will be great fun.”

Jamie Smith, Jon Purdie, Darren Simkin and Tony Dinning are also part of a Wanderers side under the leadership of Mel Eves.

The competition starts at 1.40pm on Sunday and is made up of two semi-finals, a final and a third-place play-off.

Purdie played alongside Nixon when the keeper arrived at Molineux from Manchester City during Brian Little’s short spell in charge.

He played 16 times for the club in all, his last game (a 3-0 home defeat against Wrexham) coinciding with the first sighting in gold and black of Bull and Thompson.

“I suppose I got to know them much better in Wolves-Tranmere games over the years,” he added.

“I had some great battles with Bully, who was a raw, unassuming lad when I first saw him at Molineux. Thommo came up to play for Tranmere for two or three years near the end of his career, so I saw much more of him then.

“I have nothing but happy memories of my time at Wolves. The fan base was obvious, although they were unfortunately in decline when I was there. We only had six balls between us and some of those were ropey!”

In a playing career spanning 22 years, Nixon totalled over 500 League games, the last of them coming for Sheffield Wednesday a week before his 41st birthday.

He served 13 different clubs and spent 13 years at Tranmere, appearing no fewer than five times for the Merseysiders at Wembley.

At his first professional club, Manchester City, he made 84 appearances and had Mick McCarthy as a team-mate and guiding light. “He looked after me when I was a kid coming through the ranks,” he recalled. “I’m delighted to see him doing so well now.” 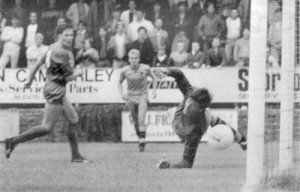 Nixon under threat in Wolves' 2-1 win at Aldershot in August, 1986. Watching anxiously from afar is Darren Oldroyd.

City were Nixon’s parent club when he was sent out on loan four times in 1986-87 – moves that earned him a Guinness Book Of Records as he became the first player to appear in the First Division (with City and Southampton), Second Division (with Bradford City), Third Division (with Carlisle) and Fourth Division (with Wolves) in the same season.

Wirral-based Nixon, who also worked as a fitness trainer in Dubai for a year, is looking for a fresh post after relinquishing his part-time position with Fleetwood.

The Grass Roots Show runs from tomorrow (Friday) until Sunday. Details are available from www.grassrootsfootball.co.uk