A Trophy For The Molineux Cabinet

Concluding our detailed look at Wolves’ triumphant participation in the inaugural Texaco Cup 40 seasons ago……on May 14, we looked in detail at how Bill McGarry’s men became expert travellers in reaching the competition’s last four. Now, we reflect on the semi-finals and final.

In what was described as a ‘wistful’ glance back at the Texaco Cup, Wolves fanatic Jim Heath referred to the competition in a When Saturday Comes article a decade ago as ‘a kind of British Isles Cup for also-rans.’

He also said it heralded the game’s modernisation, with corporate sponsorship being cautiously welcomed in the form of the £100,000 the oil giant sunk into the venture.

Whatever the commercial repercussions, Wolves were enjoying themselves in it as they cruised through to the last four during a 1970-71 season in which they would also savour their highest League finish (fourth in the top flight) of the last 50 years.

The opening two rounds had taken McGarry’s men across the Scottish border. Now, the draw for the semi-final handed them a December 1 trip to Northern Ireland that was high on curiosity value. 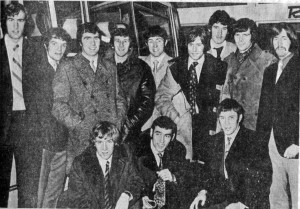 Wolves' players on arrival in Northern Ireland 40 years ago.

There was also some apprehension in the ranks in light of the escalating unrest in the province that had put question marks over the tie with Derry City actually being played.

Derry were having to play some of their domestic games away from their Brandywell ground in the heart of Bogside and a major security operation was staged as Wolves set off following a three-game win-less run in the League.

“Belfast was a scary place to stay in those days,” recalled utility man Les Wilson. “I remember barbed wire fencing all over the streets, with soldiers and police on corners. To say it felt nervy and dangerous would be an understatement.

“I was Derek Dougan’s room-mate on the trip and was assured, along with the rest of the ‘Tea Set,’ that we would be okay if we stayed with him.  About 9.30pm, Derek, John Holsgrove, Waggy, myself and others were thinking about going out for a stroll before our usual tea and biscuits.

“Thank God we thought hard and long about going out at this hour of the night.  All of a sudden, there was a massive bomb explosion just up the road from our hotel.  It shook me and the rest of the lads but didn’t disturb Derek in the least. He still slept like a baby!”

Texaco Cup ties were largely played in the same weeks as those in the major European competitions, this particular game kicking off in the early afternoon at a venue fringed by a dog track.

Derry billed the occasion – the first competitive fixture they had ever played against an English club – as the biggest game in their history. Several businesses brought their half-day closing forward from Thursday to Tuesday, so employees could be present, and factories let staff leave early. 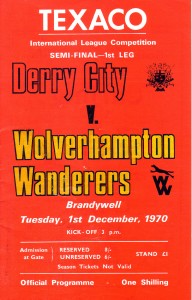 'The biggest game in Derry history.'

More than 10,000 crammed into a ramshackle stadium, with some perched precariously on the roof of a rickety stand. And there was the extra variable of a shocking pitch. Heavy rain had left the surface so treacherous that Derry’s manager Jimmy Hill (no relation) apologised to the Express & Star’s Phil Morgan for Wolves having to play on it.

Even arriving there in time proved a problem to the visitors. “The bus driver got lost in the slow-moving traffic and we were repeatedly stopped at checkpoints, Wilson added.

“Soldiers with guns came aboard to check everyone and we only made it with a few minutes to spare before kick-off. The 1-0 win was a great result under the circumstances and, as the Derry supporters invaded the field afterwards, one caught up with me and punched me in the face.

“I had a bloody nose and never was I so pleased to get into the friendly confines of our dressing room as that day. It was certainly a relief to get back to Wolverhampton with a victory.”

Bobby Gould took his goal tally in the competition to four with the decisive header past amateur keeper Irwyn McKibbin from John Richards’ right-wing cross eight minutes from time. It was one of the few occasions the forward escaped the clutches of his marker, a medical student called Ray White.

Even then, there was a scare at the other end as Frank Munro headed off the line following a corner but Wolves were delighted at planting a foot in the final.

Ironically, they had had to cope without The Doog because of a shoulder injury picked up playing for Northern Ireland. In addition, Mike Bailey, Dave Wagstaffe and Derek Parkin were also sidelined, the captaincy passing to the impressive Jimmy McCalliog.

If Wolves had encountered unusual problems in their away leg, Derry would have much the same to contend with a week later.

They were actually in Wolverhampton when the return was postponed on match day because of fears over power cuts. Consultations with the MEB had prompted the decision and it was three and a half months later that the game was finally played.

Wolves were in a useful vein of form at the time, having just followed a 2-0 home victory over West Ham by thrillingly winning 4-2 at Albion.

And they were hardly stretched by a Texaco assignment they won 4-0 on a sad Molineux occasion that coincided with the death of the club’s long-serving former secretary and general manager Jack Howley at his Wombourne home. 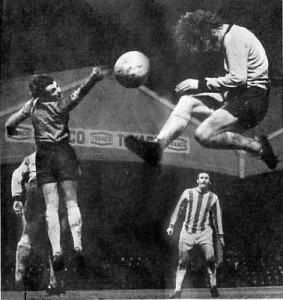 Parkin opened the scoring with a strong run and finish, then, after a long wait for the knock-out blow, Hugh Curran drove home from Wagstaffe’s half-cleared cross. Two centres by Bernard Shaw set up the final two goals in front of a healthy 15,784 crowd, Mike O’Grady and Gould finishing with a shot and header respectively.

Wolves had earned £7,000 for reaching the final and organisers were assured of the cross-border clash they wanted because Heart of Midlothian faced Motherwell in the other semi.

Hearts, having overcome a 3-1 deficit to beat Burnley in the first round, had gone on to oust Airdrie 7-3 before edging out Motherwell by the odd goal.

Perhaps the high spirits of their journey ran away with them, though, because Wolves’ visit to Tynecastle was made all-ticket, with the police setting a 44,000 capacity.

In the event, just over 26,000 turned up on the Wednesday night of April 14, 1971, two days after Wolves had won at Everton and four after they had lost at Manchester United.

Bailey shrugged off a back problem to take his place but Shaw’s absence for the first time since September meant Gerry Taylor returned to a side who trained at Hibernian’s Easter Road home while their opponents were bedding in at a training camp at Peebles in the border country.

And Hearts’ more relaxed build-up was reflected in the brisk start that brought them a seventh minute lead as centre-forward Don Ford headed in a Jim Townsend centre that deflected off John McAlle. 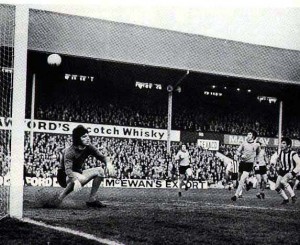 Trouble brews for 'Lofty' Parkes at Tynecastle as Hearts' goal flies past him off the head of Don Ford.

The equaliser came in the 17th minute, though, when Wagstaffe beat two players and set Bailey up for a fine shot, then Glaswegian Hugh Curran pounced on good approach work by O’Grady to score just before and just past the half-hour.

Wolves had once more produced their best form on their travels, the only down-side to their 3-1 victory being bookings to Curran, Bailey and O’Grady by a 6ft 4in referee known as ‘Tiny’ Wharton.

There had still been enough in Hearts’ response, notably when Phil Parkes touched a shot by George Fleming on to the post, to suggest that the second leg nearly three weeks later was not a formality.

And the Scots’ manager Bobby Smith, who had made a special scouting trip to the West Midlands, showed he still meant business by having his players training over May Day weekend at Castlecroft after signing off their season with a big win over Cowdenbeath.

Wolves, at the time, were clinching their UEFA Cup spot by beating Burnley, Steve Kindon and all, but emphasised their liking for the Texaco Cup by saying they would still relish the chance to play in it in 1971-72 if they had some silverware to defend. 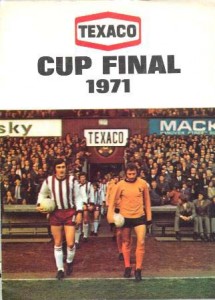 The front cover of the programme for the Wolves v Hearts return in the West Midlands.

Curran was left out in favour of Gould after failing to score in the last two League matches and it was just as well that Munro was outstanding at Molineux despite Fleming’s 25th minute strike that left the outcome in doubt.

Dougan and O’Grady went close to an equaliser but Wolves had to keep their wits about them to preserve the 3-2 aggregate lead that made them the tournament’s first winners.

Once again, the Molineux leg had been anti-climactic but the unofficial title of British Isles champions was not to be sniffed at.

Wolves were on their travels again the next day – for a friendly in Israel – while Hearts departed on tour of the United States.

Footballers seemed more happy to spread their wings in those days, even if it was sometimes on trips for which passports were not required.