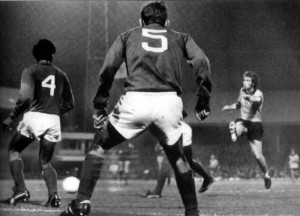 Peter Eastoe scores against Belenenses. This is one of 400-plus photos from Wolves In Pictures - produced by Thomas Publications in liaison with the Birmingham Post & Mail.

Peter Eastoe has been named in a best all-time X1 – but not for his contribution at Wolves.

The young early 1970s Wanderers forward is one of three former Molineux men selected in the star line-up, which covers well over 30 years of football.

The other two are Ernie Hunt and Glenn Hoddle – a disclosure that will lead the more enlightened to work out that we’re talking of a Swindon Town dream team from across the decades.

The side appears in the autobiography of another man with Molineux connections, Swindon legend John Trollope, and has Hunt and Hoddle in central midfield behind Tamworth-born Eastoe, who is now 57.

Trollope writes: “Peter was a very good goalscorer and had that happy knack of being in the right place at the right time in and around the box.

“He wasn’t the biggest or the best in the air but he was bright and lively and his movement was very good. I wasn’t surprised he went on to do well in the First Division.”

Sadly, that impact was with QPR and Everton rather than at Wolves, where the only goal of Eastoe’s two spells (totalling 17 first-team games) came against Belenenses in the UEFA Cup in 1973.

But the former English youth international more than justified Swindon’s club record £88,000 outlay on him in the month of Wolves’ first League Cup triumph at Wembley.

Having averaged a goal every other game in a loan spell with them, including a brace on his debut, he scored 31 times as Swindon challenged for promotion from the Third Division in 1974-75.

Eastoe as a Swindon star.

That record earned him hero’s status at the County Ground and alerted bigger clubs, one of whom, QPR recruited him in 1976.

Trollope, who had a coaching spell in Wolves’ Academy in recent years, said of his other choices: “Ernie had such great ability and is probably the best screener of the ball I’ve ever seen. He was a born joker and enjoyed life off the pitch.

“And what a player Hoddle was! That ability to spray the ball around….I’ve never seen anyone who could do that, before or since. It was great to watch. He must be one of the most naturally talented footballers, if not THE most, England have produced since the war in terms of passing ability.”

They beat Coventry 3-1 on penalties to progress through the semi-finals and then beat Birmingham 2-1 in the final thanks to goals by Darren Simkin and Tony Dinning.