An Entertaining Audience With Lofty

Souvenir From Afar Leads To Reminiscences 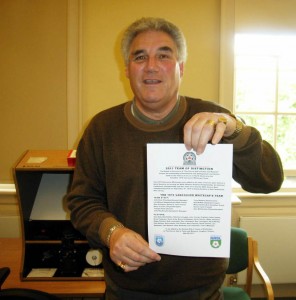 Phil Parkes with a reminder of his happy days in Canada. Try clicking on photo to enlarge.

Phil Parkes was given a tour of an old haunt and an insight into a new world as he took delivery of a special keepsake from almost 5,000 miles away.

Let’s be frank: Lofty is no slave to computer technology and had not previously clicked on to Wolves Heroes – a website on which he has featured several times.

But his eyes lit up at the articles and photographs featuring so many of his former team-mates and the questions came thick and fast: Is that really Danny Hegan? Does Bertie Lutton still live in Australia? And what happened to Barry Powell’s hair?

He was no more entertained by our offerings, though, than we were by his recollections. Each mention and glimpse of a different player brought a different funny story, none more so than Bobby Gould, who celebrates his 65th birthday today.

“I remember him coming here with Arsenal in the late 1960s and standing right in front of me, so I struggled to take a drop-kick with my left foot,” Parkes said.

“I said: ‘Gouldy, if you do that to me again, I’ll nut you.’ He did – and I was true to my word! I just made sure the referee and linesman were looking away before leaving him rolling on the ground.

“We had a laugh about it when he signed here not long afterwards. It was much easier to get away with things then without all the TV cameras around.”

Our meeting with Lofty came about after Les Wilson emailed us with a scroll of honour to pass on to him.

The 1979 Vancouver Whitecaps side, of which Parkes was a key part, have this year been named as the Team of Distinction in Canada’s Soccer Hall of Fame – a get-together Wilson attended with his wife Lois.

The honour sent us rushing to the Archives Library in the beautifully redeveloped Molineux Hotel to research the final days of Lofty’s 382-game first-team Wolves career – a swansong that came a week after Kenny Hibbitt was carried off with a fractured ankle in the 3-3 home draw with Norwich in March, 1978.

Billy Rafferty made his debut against the Canaries but, at the other end of the field, Paul Bradshaw had been an ever-present since his first Wolves appearance came at home to Leicester in the previous October.

Parkes had not played in the senior side since the September and as a result had been given permission to join Vancouver Whitecaps permanently, so he went in on the Friday to collect various belongings and say his goodbyes.

Shortly afterwards, though, came a call from manager Sammy Chung asking him to play the following day in a relegation four-pointer at West Ham. Bradshaw had gone down with a stomach upset and Gary Pierce was fit only to play in the reserves after being out all season with a wrist injury.

“I was aware that if I picked up an injury for Wolves in the meantime, the whole deal with Vancouver could be in danger,” Lofty added.

“I was reluctant to play because all my family were going out to Canada with me the following week and there was a lot to lose. But I liked Sammy and eventually agreed to play.”

Parkes dislocated his finger at Upton Park when punching away a cross with Wolves two up but he was still man of the match in a 2-1 win in a game in which Derek Parkin and Derek Hales were sent off for a dust-up.

Wolves were at home to Albion in the following midweek and Chung asked Parkes to continue. “I said no this time,” the player recalled. “I just couldn’t risk scuppering the deal. I was flying out the next day, so I had to tell Sammy to get lost!” 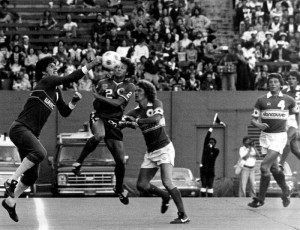 Our meeting with Lofty took place at the Molineux Hotel – venue for the reception after his 1971 wedding with Maureen.

Hugh Curran was best man and the Wolves players had a rare look at a venue they tended to avoid by night.

“It was too close to home,” Parkes explained. “It was nothing like today for players being spotted out and about but we preferred to go a little further afield to socialise.”