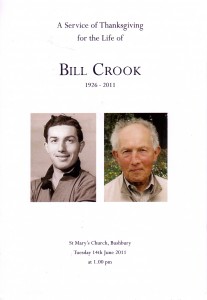 He was born a couple of beefy goal-kicks from Molineux in Bushbury, married his first wife there and would have been touched that a scattering of Wolves players from various generations congregated at the same church this lunchtime for his funeral.

Crook had been living in the Warrington area for the last four and a half decades, a promotion to director level in the engineering industry having taken him to Cheshire.

He stood proud, though, not only as the youngest member of the club’s triumphant FA Cup final team against Leicester in 1949 but also as a Wolverhampton-born Wanderer.

We talk of the famous trio of Bert Williams, Bill Shorthouse and George Showell as being boys born almost in Molineux’s shadow.

But, if we’re splitting hairs, they were from Bradley, just the other side of Bilston, while Phil Parkes was from West Bromwich, Gerry Harris from Claverley and Norman Deeley, Johnny Kirkham and Mel Eves from Wednesbury.

There haven’t been many from the city area itself in the 80 years or so separating Billy Hartill from the present-day duo of Karl Henry and Richard Stearman.

Crook went to the town’s municipal grammar school and would have made many more than his 221 League and cup appearances for the club had the war not got in the way. Oh and if he hadn’t insisted on playing football only around his ‘day job’ as a structural draughtsman at Rubery Owen in Darlaston!

Like Bill Slater and Dennis Wilshaw after him, Crook played part-time, training only at night after joining Wolves’ books at 14 in 1940 and then scoring in a 1-1 draw against Swedish visitors Norrkoping in a friendly in 1946.

In between, he guested for Chelsea and Aldershot while also finishing third in Wolves’ wartime appearances list (121 games) and didn’t make what would now be recognised as his competitive debut until facing Lovells Athletic in the days immediately post-war when FA Cup ties were played over two legs.

His first Division One game for the club followed at Blackpool in September, 1946, as the League programme commenced following its seven-year interruption. 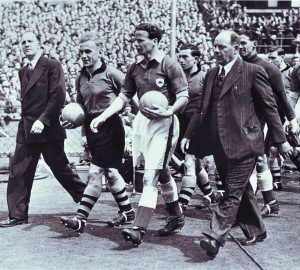 Proud moments at Wembley 62 years ago - with Bill Crook second in line, as usual.

Thirty-eight more League outings came his way under Ted Vizard in that season in which Wolves were famously and heart-breakingly pipped to the title by Liverpool. Look at the old photos of Stan Cullis leading the side out for the last time before his retirement as a player and Crook is first in line behind the captain, as he was when Billy Wright strode out at Wembley two years later.

With a pair of wing-halves like Tom Galley and Billy around, it’s to Crook’s immense credit that he played as often as he did in the no 4 role he adopted as his favourite after starting largely as a left-back.

He was again a regular in the Wembley season and played over three-quarters of the games as Wolves finished as League runners-up in 1949-50.

But he eventually fell foul of the incredible competition for places that came with the signings of Ron Flowers, Slater and Eddie Clamp and played from 1954 to 1956 for Walsall (51 appearances) before completing his three Ws by dropping into non-League with Wellington.

“He and players like Billy Wright were my mentors,” said Ted Farmer, who was joined in church by Flowers, Showell, Parkes, Eves, John Richards and Les Cocker, as well as Richard Skirrow, John Hendley and Graham Hughes from the club.

“He was pugnacious, a very hard tackler who would tend to win the ball and then pass it short to those who were better with it.

“But he was a very good player. Who knows how far he might have gone if it hadn’t been for the war? He might even have made it to the England team, although he had several of the same obstacles to a place that he had at Wolves!”

Bizarrely, the only two first-team games in which Crook had his elder brother Alf as a team-mate were the 1949 FA Cup semi-final replay victory over Manchester United and a League draw at Liverpool just after.

Crook, who died in hospital at the end of last month aged 84, once said: “My most memorable games were the two semi-finals against United. I reached them much more comfortably than the Wartime Cup match when I had to beg a lift on the back of a lorry and travelled unrecognised.”

In his ‘My brother Bill’ tribute today, 87-year-old Alf recalled how the the younger sibling had first caught the eye of Wolves when impressing their trainer Jack Davies while playing against them in a friendly for Boulton Paul. “He was going to succeed from day one,” he added.

Crook returned to Molineux to coach the junior teams before heading north in 1965. Following the death in 1988 of his wife Joan, with whom he had two daughters, he married Betty in 1995 and became a widower again in 2005. 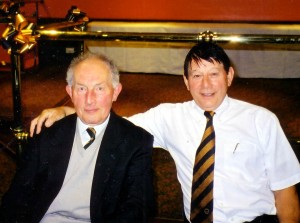 He had latterly been in poor health and it is a sad reflection of time’s passing that so many of his surviving team-mates – including 1949 Wembley colleagues Williams, Sammy Smyth and Jimmy Dunn – were prevented from attending today by frailty or unsteadiness as well as by distance.

Vaughan Williams said in St Mary’s Church, though, on behalf of his father: “Bill was a manager’s dream. He played hard and fair and treated every game like a cup final.

“We will miss him greatly and he will always be in our thoughts and hearts.”