Daley Thrilled By ‘Away Win’ 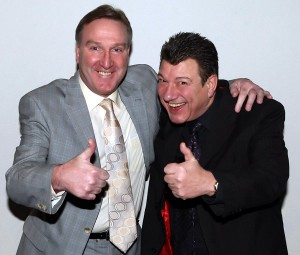 Steve Daley on the after-dinner circuit with actor Austin Knight.

Steve Daley is celebrating a successful first visit to Scotland after being named Soccer Speaker of the Year for the third time in a row.

The one-time British record signing beat Alan Kennedy and local favourite Frank McAvennie to take the Jim Baxter Memorial Trophy and establish himself as the king of the after-dinner circuit.

“I suppose there will be jokes now about this being the first hat-trick of my career,” Daley said. “Come to think of it, I might use that line in my act.

“I’m thrilled with the award because I won it in Glasgow, where I really thought Frank would get the vote. We were at the Grand Central Hotel in front of 280 guests, nearly all of them Scots, and the roof nearly came off when he was introduced.

“I said to Alan Kennedy: ‘We might as well go and have a couple of drinks. How are we going to beat this?’ After we had all done our bit, one punter told me at the bar he thought I was brilliant – but he was still going to vote for Frank because he was his playing hero.

“Apparently, though, I received about 85% of the votes. I stormed it!”

Daley triumphed in Leeds in 2009 and Manchester last year, having dislodged his former Molineux team-mate Steve Kindon from the perch.

Amazingly for a player who was emerging strongly around the time of Wolves’ Texaco Cup travels, this was a first-ever trip north of the border, football-related or otherwise.

Although he didn’t make his debut for the club until a few months after the Texaco Cup had been won in 1971, his appearance tally was well into double figures by the time he missed out on the trip to Kilmarnock in the same competition in 1972-73.

The 58-year-old still works as a rep for three days a week but has a busy night-time diary that continues with a booking by Worcestershire headmaster Clive Corbett – author of the excellent Wolves book ‘Those Were The Days’ – for Pershore School next week. 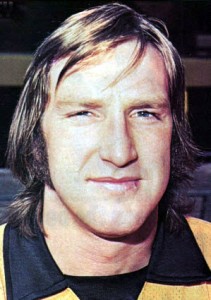 “If there’s a quiet time of year for dinners, this is it because of holidays,” Daley added.

“But I’m also due to meet the Manchester City chief executive Garry Cook to discuss a possible date there. Around 400 were in the room last time I spoke at Eastlands and I was thrilled to be given a standing ovation.

“Part of my act is obviously based around the fact I wasn’t exactly a roaring success as a player at City and I always get in the line: ‘I bet you lot thought you’d never have to pay to watch me again!'”