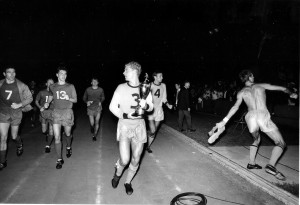 Derek Dougan would have been 73 today. It’s over 36 years since he last kicked or headed a ball for the club but Wolves fans of a certain age are still stirred by pictures of his angular frame. And, fortunately, there have been lots of them.

He was one of the most photographed players of his generation and the prints that were hung out to dry in Midlands dark rooms four decades or so ago must have borne more images of him than any other player on the patch.

Just when we think we’ve seen every photo of him that was ever taken, so one or two more pop out of some dusty archives. And the one at the top of this story is typical Doog.

Not for him a muted celebration of the club’s triumph as Los Angeles Wolves in 1967. Instead, off came the sweat-sodden shirt and into the crowd it flew. Pure showmanship. Fingers crossed the lucky recipient looked after it……

Back on English fields, if Dougan wasn’t captured putting his hands to his face or his head in exaggerated exasperation at a near miss, he was snapped while engaging in animated and usually affectionate conversation with a marker or referee.

And didn’t he over-run the byeline and end up in the front rows of the crowd much more than the average player?

We had been given a preview of his love of the camera on the day he joined Wolves from Leicester in March, 1967, when he posed as if jumping from a ledge on Waterloo Road right outside Molineux.

The goal celebrations were legendary, of course. To my knowledge, he never sprinted, then slid to the corner flag to rejoice and it’s interesting to ponder how he would have reacted to scoring amid today’s extravagancies. A simple arms-aloft salute and a wave to the crowd – in his case often with a smile refusing to crack across his face – just don’t seem to hack it for modern-day players.

The Doog was big box office – different hairstyles, including the shaven-headed look of his Aston Villa days; the eight-week ban; all those books; the charisma; the ungainly posture and run; the radio shows; the pundit appearances; the controversies; the embraces; the campaigns, PFA and otherwise; the dynamic partnership with John Richards; and the goals. All 123 of them for Wolves to make this by far the most successful port of call on his football travels.

There have been unsavoury headlines since his passing and I had my own ups and downs with him in his latter years.

Not long after he had made me an offer to write what he called the final instalment of his autobiography – a carrot he dangled while obligingly and patiently signing several bits and pieces of work – he fired off a not-so-friendly demand for a not-so-insignificant sum to cover what he perceived as image rights in the same publications.

It was a matter that remained at a loose end and he might well have taken a few of those with him to the other side when he died at the age of 69.

On this sad fourth anniversary, though, it’s best to remember the brighter aspects of his colourful tapestry. There were lots of those because he touched and brightened countless lives. 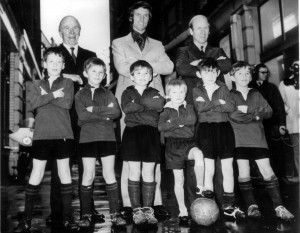 Anyone who was at his funeral at St Peter’s could not fail to notice the warmth of the goodbyes and the glow of fondness at the recollections of him.

Not only did his pulling power see to it that Les Wilson came over from Vancouver and Jimmy McCalliog travelled down from Ayrshire. What about those fans outside the church who spontaneously broke out into a moving old North Bank chorus during the service and the council staff who ceased work for a few minutes to watch and applaud from their office windows?

It was a fitting tribute because the likes of Derek Dougan don’t pass this way that often.