Step-up From The Ranks For Midfielder 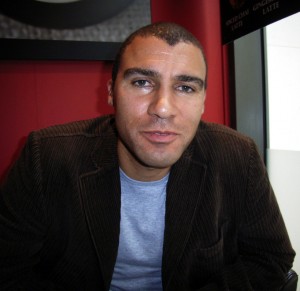 Mark Burke....planning for a hectic Saturday night out.

Mark Burke takes over the role vacated by Mick Gooding by leading a new-look Wolves into Selco Midland Masters action this weekend.

The former Molineux midfielder has been a regular in the team who have successfully carried the club’s colours in the event in the last few years.

But he reacted with surprise at learning from us this afternoon that he will be skipper at Birmingham’s National Indoor Arena on Saturday, when midfielders Colin Cameron and Kevin Cooper return to the gold and black fold.

“Me captain?” he asked. “Something was mentioned but I thought it was a joke! That’s a bit of extra pressure then.

“I don’t think I’ve skippered a side since I was about ten. And that game wasn’t live on Sky Sports!

“I think the organisers like to freshen teams up a bit to try to boost the attendance but we’ve got a good record in the event which we’ll be trying to maintain.”

The format of the night’s fast and furious entertainment is also altered, with six teams taking part instead of four and each restricted to a squad of eight players rather than nine.

Albion, Aston Villa, Birmingham, Coventry and Walsall also take part with the winners of the two groups of three playing off for the right to go forward to the national final at the MEN Arena, Manchester, on September 4.

Gooding had said the tournament two summers ago would be his last but returned last year as Wolves lost to Nottingham Forest in the final of the Central Masters in Nottingham.

They won the Midlands Masters in 2009, having the previous year followed up their local success by becoming national champions. 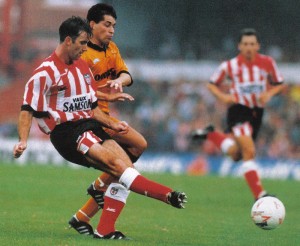 Andy Thompson in action at Sunderland a decade and a half ago. Now he's a Masters veteran.

The other main omissions this time are David Kelly, who has this summer left Nottingham Forest with Billy Davies, and Michael Gilkes.

Kick-off this Saturday is 7pm. Ticket information can be accessed through http://www.thenia.co.uk/whatson/midlandmasters