Gerry Bedded In After Early Misfortune 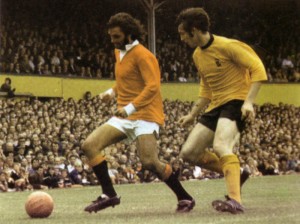 Insecurity comes in different forms. For the young Gerry Taylor at mid-1960s Wolves, it might well have sprung from the fact that the right-back position had become something of a hot potato.

Considering the club were promotion-bound in his debut season and stabilising again following the departure of Stan Cullis, they rung the changes in the no 2 role with great frequency.

Ken Knighton played the first two games of 1966-67 there, Joe Wilson took over for the next one, then Les Wilson was called up by manager Ronnie Allen for an outing before his unrelated namesake was restored – and retained until early December.

Another flurry of changes followed with Graham Hawkins drafted in at right-back for the win at Norwich before Ron Flowers was switched there for the next three matches. Then, cue another different face, this time a new one…….teenager Gerald William Taylor.

“I can’t remember there being an injury that let me in,” he said. “I just think I’d done all right in the reserves and I was given my chance.

“Ron Flowers was coming towards the end as a first-team player and I was brought in at home to Ipswich on New Year’s Eve at the age of 19.

“I must have done okay because we drew 0-0 and I kept my place but I feared the worst after we lost by the only goal at Bristol City the following week (in Flowers’ last competitive game for the club).

“If I remember right, there was a shot from outside the area and it deflected off my leg past Fred Davies while I was positioned in the middle of the penalty area.

“I don’t think I ever scored an own goal in my career but worried, as you do at that age, that this might be seen as a black mark.

“Although I felt terrible, I needn’t have worried too much because I stayed in the team virtually for the rest of the season as we won promotion behind Coventry.

“The only two games I missed were after I pulled my hamstring at home to Bury and had to be substituted. I sat in the stand the day we lost that amazing game at Coventry and also missed the Norwich match before returning at Crystal Palace on the final day.”

At Highfield Road, skipper Mike Bailey became Wolves’ seventh and final occupant of the no 2 shirt that season before it reverted, for the last time, to Joe Wilson against Norwich.

Wolves averaged well over two goals per game on their way to a runners-up finish while conceding less than one per match in Taylor’s 17 League appearances that term.

The youngster kept his place for the first 18 games of the following season back in the top flight but on occasions came to be viewed as a stand-in after the signings of Derek Parkin and Bernard Shaw.

He still featured in much of the UEFA Cup run in 1971-72, though, including both legs of the semi-final and final, and also played in the semi-final defeats in both the FA Cup and League Cup in 1972-73.

“I did just over ten years at Wolves but Mike Bailey, Waggy and The Doog were due testimonials around the same time, so I never had one,” added Taylor, now 64. “The club were swamped with them.

“I might have joined Swindon if the clubs had been able to agree a deal after I spent a few months loan on loan there but I decided to call it a day and go into the police force instead.” 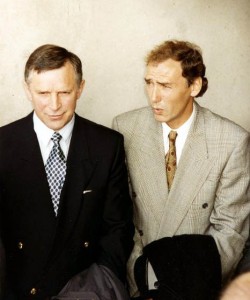 Taylor with John McAlle (right) on a latter-day collar-and-tie occasion.

Taylor, who still works in the museum area at RAF Cosford, also just missed out in another way. He was left eight short of the 200-game milestone after playing in 192 League and cup matches for Wolves.