Keeper Shoot-Out Wins It For Villa 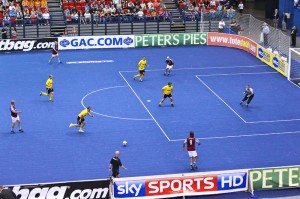 Wolves on the defensive in the Midland Masters final.

Wolves were tonight denied their usual Midland Masters Cup triumph when they were beaten on penalties in the final by Aston Villa.

It looked like business as usual when Wolves, who had won on each of their last four appearances in this tournament, led 2-0 through Scott Taylor and Phil Robinson in the evening’s last game at the National Indoor Arena, Birmingham.

But Villa, who included Molineux fitness coach Tony Daley in their line-up, salvaged a 2-2 draw thanks to goals by Mark Kinsella and Neil Cox, the second only 40 seconds from the end, then also hit back to win the penalty shoot-out.

Wolves’ noses were again in front, only for Don Goodman and keeper Derek Dudley to miss from the spot either side of a successful conversion from Villa keeper Paul Crichton.

Wolves, skippered by Mark Burke and with the evening’s highest average age of 41.1 per player, qualified for the final by topping Group B on goal difference from Albion.

Having beaten Walsall 3-1 in their opening fixture thanks to goals by Goodman, Masters debutant Kevin Cooper and Robinson, the 2008 British champions needed only a draw against the Baggies to go through.

And they managed just that, although Colin Cameron and Robinson had to come up with equalisers as honours ended even at 2-2 following goals by Carl Heggs and Roy Hunter.

Villa had a 100 per cent record in Group A at the expense of Coventry and last year’s British champions Birmingham and had 20 minutes’ extra rest before the final than Wolves. 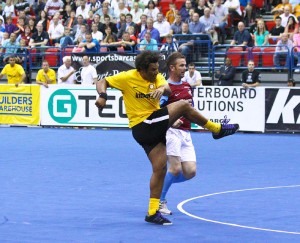 Cameron, now player-manager of Cowdenbeath, was also making his Masters debut and took a turn in the commentary box after Goodman for Sky Sports.

He, Burke, Robinson and Cooper were Wolves’ successful penalty takers, with Andy Thompson surprisingly not taking one.

Villa now go forward to the Grand Final of the Selco-sponsored tournament at the MEN Arena in Manchester on September 4.