Cullis Mantra: In Noakes We Trust 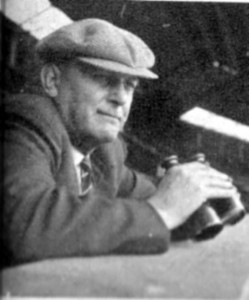 George Noakes with one of the tools of his trade - and in his trademark flat cap.

When the passing of the decades dictates that we no longer have the chance to meet cherished Wolverhampton Wanderers personnel, we have to rely on other methods to present our tributes to them.

In the case of the club’s late former scout George Noakes, that means taking advantage of the stroke of luck that came with our recent dip into some football literature of yesteryear.

An article we stumbled on in a 1959-60 annual told us much more about the man who worked for many years as a trusty ally of Stan Cullis and who brought to the great manager’s doorstep some of the names which underpinned the club’s worldwide fame.

Noakes had Black Country roots and worked in industry locally before his passion and expertise at spotting a young talent saw to it that he operated in the game for a living.

“My connection with the club goes back more than 20 years since I first started recommending local players to them as a kind of hobby,” he said in the article just over half a century ago.

“I was working as a steel mill roller near Wednesbury in those days but gradually drifted more and more into close contact with Wolves and, eventually, I was able to make scouting my full-time job.”

Noakes started officially scouring the junior market for Wolves soon after the Second World War and is said to be the first man to have filled the scouting role for the club.

He became a valuable aid to another man who has a place in Molineux folklore – one synonymous with the production of so many outstanding young players.

“Mark Crook, a former Wolves winger of the 1930s, runs two of our nursery sides at Wath in Yorkshire,” Noakes added. “He knows exactly the sort of player we specialise in from his own experience at Wolverhampton.

“Players like Roy Swinbourne, Jack Short and Ron Flowers all came from his part of the world.

“I enquire into the player’s background because we have no time for what are known as bad ‘uns. A youngster who does not live cleanly and look after his physical well-being is a danger to any club.”

Thankfully, the West Midlands and slightly beyond rivalled Yorkshire as a fertile breeding ground at that time. “Stars like Eddie Clamp, Norman Deeley, Jimmy Murray, Bobby Mason, Gerry Harris and George Showell, to name but a few, have all passed through my hands,” Noakes added.

“Once, in Edinburgh, where I went to sign Johnny Walker, I was firmly told that he was booked for Glasgow Rangers and no other club. Solemnly, I listened, knowing all the time I had the player’s signature in my pocket.

“Eddie Clamp came to Molineux after I watched him play in a game at Coalville, Leicestershire, where he gained England schoolboy honours.

“I lost track of him after the match and, as it was pouring with rain and I had some time to wait for my train, I went into a local hotel. Later in the evening, I went out for a paper and there, helping the lad sell them, was Eddie Clamp!” 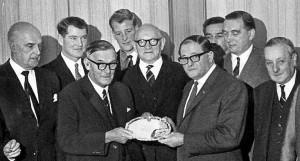 George Noakes (two in from the left) receives an award for outstanding service from Wolves chairman John Ireland at a Wolverhampton Sportsmen's Committee dinner at the town's Victoria Hotel in December, 1966.

Little was known at Molineux of Noakes’ age or his playing background, although he told his club colleagues: “I used to have a go. I wasn’t much good but I could stop those who were!”

Cullis wrote in his 1960 book, All For The Wolves, that Noakes had been a team-mate of Billy Walker (later an England and legendary Aston Villa forward) in a Wednesbury side around the time of the First World War.

And he went on: “No scout or manager is infallible but George comes as close to perfection as any. If he tells me that a player is not up to the standard we require, I rarely bother to make a second check. If he recommends a player, it can almost be taken for granted that the man will be signed.”

Veteran Warwickshire-based Wolves fan Don Noble added in an email to us this week: “It has been suggested that Wolves’ fall from the top in the early 1960s and the end of Cullis’ reign followed the end of George Noakes’ active career.

“George was not just a good scout, he also had a persuasive tongue that could coax a signature from under the noses of rival scouts.”