Penalties: Some Food For Thought 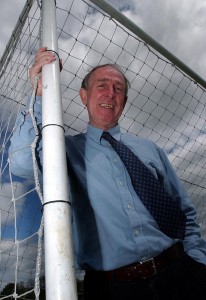 First it was Chris Waddle and Stuart Pearce in Turin in 1990. Then, a tentative Gareth Southgate inadvertently passed the audition at Wembley in 1996 for an embarrassing pizza advert.

Fast forward to Paul Ince and David Batty in France ’98, to Darius Vassell, a keeper called Ricardo and even David Beckham in Portugal in 2004, and finally to more of the same agonies against the same opponents two years later.

Or at least we dared to hope it was an ‘and finally.’ Not so, apparently. Even England’s women are now plagued by the curse of penalty bloody shoot-outs.

The ladies’ gaffer Hope Powell went harder than Bobby Robson, Terry Venables, Glenn Hoddle or Sven Goran Eriksson ever did with her accusations of cowardice after struggling to find willing takers in the World Cup quarter-final shoot-out defeat against France last weekend.

All of which would have bemused the late Wolves inside-forward David Burnside.

England were still in ‘L’ plates as penalty-kick bunglers when the long-time national youth coach took a very different tack almost two decades ago. He had no truck with managers seeking volunteers in football’s ultimate pressure cooker.

“I wouldn’t have that,” he told me in an interview in autumn, 2008. “I believe it’s up to the coaches to pick the players who should step forward for a shoot-out.

“When we went to the World Youth Cup in Australia in 1993, the memory of England losing to Germany in Turin in the 1990 World Cup semi-final was still fresh.

“Our youth teams had also had the same sort of experience when beaten by Portugal and Norway in shoot-outs, so we looked hard at the subject and did our research.

“Most managers ask around their side who fancies taking one…..no, no, no! That’s wrong. Martin Hunter and myself decided WE would select the takers if there were penalties to settle any of our games in Australia.

“One guy said he didn’t fancy taking one but we told him he was taking one because we had confidence in him to do so. We said: ‘If you miss, we will take the blame.’

“We took the decision-making away from him. All he had to do was choose where to put the ball.

“He scored. In fact, they (Jamie Pollock, Chris Bart-Williams, Billy Caskey and Alan Thompson) all did. We had a 100% per cent record and put Mexico out in the quarter-finals in Melbourne. 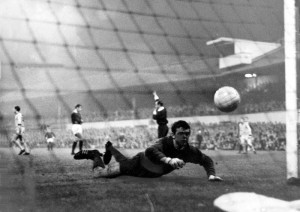 That's how it's done.....a successful penalty by Terry Wharton as part of his hat-trick in Wolves' 7-1 slaughter of Cardiff in the autumn of 1966 - a game Burnside played in.

“We lost in the semi-final in Sydney to a very good Ghana side but I remember saying to Pollock: ‘Jamie, if we get a penalty, YOU take it.’

“We did have one and he scored again; right into the top corner. I used to write reports about how we did things and send them right to the inner sanctum – the people in charge of the more senior teams. But I never had an answer.”

PS England also lost 13-12 to Holland in a shoot-out in the European Under-21 Championship semi-final in 2007.