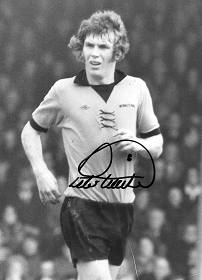 One of the signed Midlands Memorabilia/Fotosports images - taken in 1972-73.

Peter Withe has used a trip back to England to sign many of the keepsakes of his all-too-brief Wolves career.

The Australia-based former striker has this summer spent three weeks back in his home country before heading to New York for the wedding of one of his sons.

And he met up with football pals from the region when he squeezed in two personal appearances with the fast-growing memorabilia business who have bought a collection of photos of him in Wanderers colours.

“Obviously Peter would be best known in these parts for what he did at Aston Villa,” said Midlands Memorabilia proprietor Danny Drewry.

“He played in sides there who won the League Championship and European Cup but hasn’t forgotten that Wolverhampton was his first port of call in the West Midlands.

“We have a number of photos of him playing for Wolves and he has patiently signed those and a lot of Villa stuff for us.

“In fact we had so many interruptions at the first session from friends wanting to say hello to him that we had to arrange a second one.”

Withe, signed by Bill McGarry in 1973 on the recommendation of Derek Dougan, played only 17 first-team Wolves games, scoring three goals.

But he was frequently ‘snapped’ by Midlands photographer Roger Parker, who now runs the highly respected Fotosports International agency from premises in Buckinghamshire.

Some of the Wolves items can now be seen at http://www.midlandsmemorabilia.com/wolverhampton_wanderers_memorabilia.html and form part of an impressive gold and black portfolio at Birmingham-based Midlands Memorabilia. 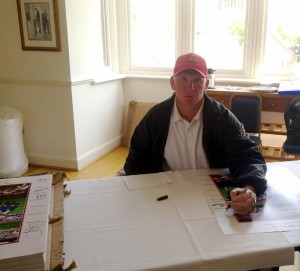 While in the region, Withe, who turns 60 next month, also attended a photo shoot by Paradise Forum, a local rock band of which another of his sons is a member.

The player is one of three former Wolves men, along with Gordon Cowans and Andy Blair, who won the 1981-82 European Cup with Villa.

He will be back in the autumn as the squad are being inducted to the Hall of Fame at the National Football Museum in Manchester.