The Cheekiest Of Detours

Skipper Lets On To London Wolves 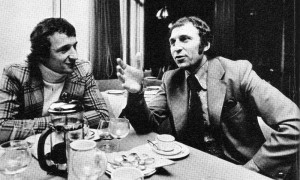 The skipper with one of the beaten 1974 Manchester City side, Mike Summerbee.

Mike Bailey has revealed a quirky little-known fact about Wolves’ joyous homecoming as 1974 League Cup winners – the team coach made a special journey past The Hawthorns!

The disclosure came in an on-screen interview the club’s Wembley captain gave for the benefit of guests at yesterday’s London Wolves 45th anniversary celebrations in the capital.

Five members of the line-up who defeated Manchester City 37 years ago were present at a dinner which also featured a late-evening appearance by Mick McCarthy.

London-based Bailey was one of those unable to attend because of prior engagements but raised a laugh with his pre-recorded revelations about the Wembley weekend.

“On the way to the reception back in Wolverhampton, Sid Kipping, the coach driver, took us past the West Brom ground,” he said. “He had a wicked sense of humour.

“I had the cup on the Monday and let my son take it to school. He was six at the time.

“Then I got a phone call on the Tuesday from the Wolves secretary, saying: ‘Do you know where the cup is? We’ve lost it.’ I said I had it and I’d bring it in.”

Bailey, who is 70 early next year, called the Wembley triumph ‘a fantastic day’ and added: “The elation (at the end) was unbelievable.

“I saw Bill McGarry run on to the field past Derek Dougan and thought he was going to shake my hand and say ‘well done’ because we’d had a few years together. 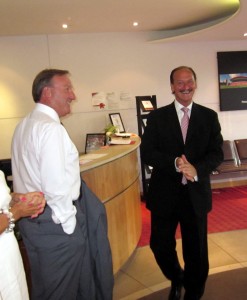 Steve Daley and Wembley scorer Kenny Hibbitt on parade this weekend at The Valley. Picture courtesy of London Wolves.

“But, no, he went to Gary Pierce, who probably thought he was going to get a bollocking. Instead, he gave him a big cuddle, a man hug.

“The thing you think then is…..what do I do now? I took my time up those steps because, believe me, when you do what we did, it’s a life achievement. I absolutely loved it.”

﻿﻿﻿﻿﻿﻿﻿Also among the 111-strong turn-out at yesterday’s do, which was held at Charlton Athletic, were Wolves director John Gough and club secretary Richard Skirrow.

McCarthy, a former Millwall player and manager, was warmly welcomed when he walked into the room and said in his speech: “That’s the first time I’ve been given a standing ovation at this place.”