Reflections On A Cruel Finale 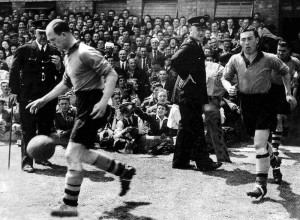 Our article on Wolves’ unexpected collapse in the 1946-47 League title race has prompted an interesting reply from Donald Noble.

The long-time supporter is something of a rarity in that he is old enough to have been at the crucial last-day home clash with Liverpool that season, yet young enough at heart to be an Internet user!

And, in an email to us, he has described some of the events of that sweltering afternoon 64 years ago as well as a build-up he believes to be questionable.

“I don’t expect there are many of your readers who were there to witness that terrible disappointment,” he said.

“I was on the South Bank with a close view of  all the goals, including that terrible mistake in the first half by Stanley Cullis – one which he probably remembered for the rest of his life.

“There was continuous (Wolves) attacking in the second half but, without Dennis Westcott to provide the final touch, it could only produce a headed goal from Jimmy Dunn.”

Our article on the run-in appeared on May 10 and clearly struck a chord with Warwickshire-based Dennis, who offered an insight into why the club’s title challenge fell agonisingly short.

“Wolves were crippled by injuries in the last few weeks of the season,” he added.

“Billy Wright, Cullis, Tom Galley and Westcott were all out for several of those last few games. Liverpool were terrified of meeting Westcott again after he scored four against them in 15 minutes at Anfield, so, to postpone the evil day, they contrived to play an FA Cup semi-final replay when they were due at Molineux. 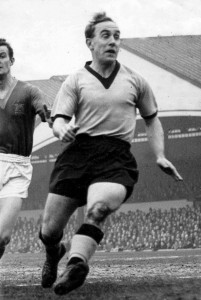 Billy Wright - key absentee for several games in the run-in.

“Midweek football was banned because of the export drive, so  matches postponed during that winter’s record snowfalls couldn’t be played until May.

“That’s why the Liverpool match at Molineux was played at the end of May. If it had been played at the proper time, Wolves would, of course, have won the League.”

The season finally ended on June 14, when Stoke, who would have pipped Liverpool to the crown had they won their final fixture, lost at Sheffield United.