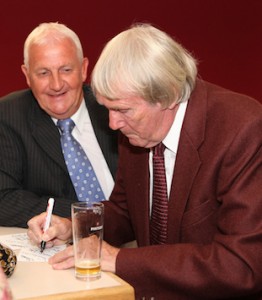 Dave Wagstaffe is buzzing after his annual trip north of the border led to an unforgettable regal crossing of paths.

He and his partner Val were delighted when the latest royal wedding brought them into close proximity at Balmoral with the Queen.

“It seems she left the young ones to the celebrations after Zara and Mike Tindall married because she then flew up to where we were staying,” the Molineux legend said.

“We knew something was happening because there were a lot of police around. We saw some of the wedding on TV, so it was lovely to then see her step out of a helicopter not long after.

“I had been lined up outside Molineux with my staff from Waggy’s Bar when she came to officially open the redeveloped stadium in 1994 but this was altogether different.

“Val is a church-goer and went to the service on Sunday morning. After they had all sat down, the Queen entered the church as well.

“I had to stay behind with her brother to look after the dog. We saw the Queen go past in a Range Rover on her way in and also saw her leave in the back of the vehicle afterwards.

“She was with her lady-in-waiting but not the Duke. She gave us a nice wave and I took a photograph or two but they haven’t come out very well unfortunately because the car’s windows are dark and the flash seems to have bounced off them.

The much-loved winger as Wolves fans best remember him.

“We were up there from Monday to Monday and stay on the estate in a cottage tucked away in the corner near the golf course.

“We were only 60 yards or so from the castle, which is where she apparently moves in for most of August and September. We go there each year but seeing her has made this visit even more special.”

Waggy can’t be sure of further royal sightings during breaks away from the couple’s home near Wolverhampton. By way of a change of scenery, he is often to be found in a caravan near Lancaster.