Long Chase Ends – And What A Tale! 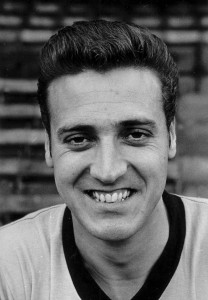 Johnny Kirkham in his hey-day.

When we made it our business nearly three years ago to track down Johnny Kirkham, we had no idea it would end like this.

We knew he lived in South Africa and were led to believe he had flown back here on a mercy mission several years ago.

What has taken us completely by surprise, though, is the magnitude of the role Wolves’ 1960s Wednesbury-born wing-half played in that stirring act – and a follow-up to it that can only be described as bewildering.

Many a writer’s copy unfolds with the strongest element of a story in or around the top of it. It’s what we are taught to do. But we feel this is one tale that’s probably told best in its entirety from the start; or at least from the point where we came in some time in the autumn of 2008. So here goes……

With our efforts at hunting Johnny down through old Molineux friends such as Fred Davies, Alan Hinton and Bobby Thomson having failed, we homed in on the likes of Terry Wharton and Fred Kemp, who had not only been colleagues of his in Wolverhampton but also contemporaries in South Africa. Not a sniff.

Then we tried officials at his post-Wolves clubs, Peterborough and Exeter; and even one or two contacts in South Africa. Dead ends. The same as when we resorted to the phone directories. Johnny Kirkham, blooded in the latter years of Stan Cullis and the maker of 112 senior appearances for the club, was proving seriously elusive.

The only fleeting hope came when Jim Barron, who had himself been no pushover to hunt down, told us last Christmas that his ex-Wanderers team-mate had contacted and met up with him while he (Barron) was at his boss Ron Atkinson’s side in Durban on an Aston Villa end-of-season tour.

But that was nearly 20 years ago and there had been no communication between the two of them since. The trail was close to stone cold, with only one iron left in the fire – and that barely tepid. Of all the 250 or so individuals this website has set off in pursuit of, Kirkham was without doubt emerging as the hardest to find.

One link – and only one – remained alive as 2008 ran into 2009 and 2009 flipped over into 2010. In the mid ‘noughties,’ I had found myself on business in the reception area of a building society in the heart of the Black Country and, while awaiting my appointment, had been engaged in conversation by an employee who happened to say she was a distant relative of Kirkham’s.

It didn’t mean that much at the time but then Wolves Heroes was established and the exchange of small talk suddenly meant an awful lot in the context of what this site is all about. Was the woman still young enough to be employed there six or seven years on?

The answer was no – or at least appeared to be no. My prying questions to receptionists on a return visit didn’t strike the flimsiest chord. Not only was the former England under-23 international a complete unknown to them, they didn’t even know anyone of that surname, nor anyone who was related to an ex-Wolves footballer, however vaguely.

But they did agree to accept a hand-written note from me; one containing my contact details in the unlikely event of a connection being made.

Months passed and nothing happened. It seemed to be the final knock-back. Even the ‘Kirkham Alert’ story we posted on Wolves Heroes last summer in an attempt to smoke out a possible lead from the public at large had gone completely unanswered. 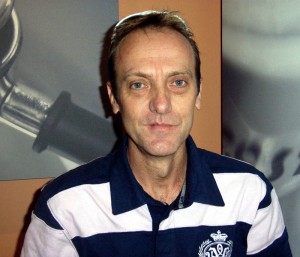 Darrell Kirkham back in Wolverhampton recently.

Then, a few hours after the clocks had gone forward in March of this year, I had a text completely out of the blue: “Hi, my name is Darrell Kirkham, Johnny Kirkham’s son. You are welcome to contact me on this number but I don’t know how much I’ll be able to tell you.” Success at last!

But the surprises were only just beginning. Darrell and I have recently met in Wolverhampton and few interviewees have ever unburdened themselves of as many riveting disclosures to me as he has.

It’s with his full permission that we will be publishing them in two or three days’ time.