Match Of A Lifetime 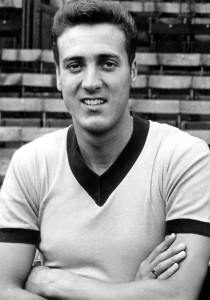 Three days ago, we detailed our long and eventful search to track down Johnny Kirkham. Now we can tell the quite astonishing story that our efforts have thrown up.

We listened, transfixed, as the former Wolves wing-half’s son Darrell relayed the chain of events to us recently in a Wolverhampton coffee shop. But it is one that has taken over a dozen years to unfold.

It is both heart-warming and sad, a tale of stark contrasts. What is undeniable, though, is that it’s complicated. So we’ll start by offering some family background……

Wednesbury-born John became a dad for the first time when Darrell was born in New Cross Hospital in the weeks following Wolves’ shock relegation in 1965, sister Tracy arriving in 1967 after football had taken the family to Peterborough.

But the move to the Fens was nothing compared with the upheaval that came with emigration to South Africa in 1969 after subsequent spells at Exeter and Horwich RMI were followed by a career with the likes of Durban Spurs, Durban United and Maritzburg.

Darrell was four and a half when the family left this country and remembers a happy childhood, with the lifestyle reflecting the status of a man who had made 112 appearances for Wolves and represented England under-23s.

“Dad was earning good money and we lived right next to a golf course,” he said, his strong South African accent not revealing the vaguest hint of his Black Country roots.

“We had a tennis court and a swimming pool and I was friendly with the kids of Johnny Byrne, the former West Ham and England centre-forward, who was out there as well.

“Football was pretty big and I remember being taken to quite a few games and watching from the back of the stand, both in Durban and when he played in Pietermaritzburg.

“There used to be an annual golf day for ex-footballers and Dad played in it with ‘Budgie’ Byrne, Johnny Haynes, John Fraser from Scotland and others.

“He was a decent player, off a handicap of 13 or 14, and taught me to play. I eventually joined the club next to where we first lived in South Africa.

“He was also very good at snooker but, as the football faded, we moved into a nice block of flats, then another house before he and my mum were divorced in 1986 or 1987.

“I remember coming back for a visit here in 1973 with my mum and sister and staying with an aunt and uncle in Wednesfield. I think that’s the only time Tracy has ever come back. She’s married with two kids and still lives in Durban.

“Dad went into the stationery business after his playing career and I think he stuck with that until he retired. He was a sales rep, travelling in and around Durban. 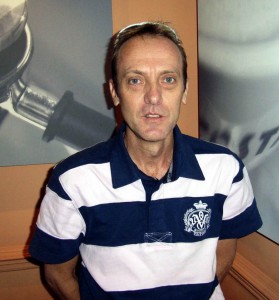 “I must have had some of the same sporting genes because I was a golf professional in Johannesburg for six years, giving lessons and organising competitions for the members.”

Now comes the more painful bit. Darrell returned to England in 1998 because his partner at the time wanted to see Europe. But, as he did so, something disappeared from the relationship he had with his father.

“I remember going to see Dad to say goodbye,” he added. “He had by now moved in with a South African lady who has since become his wife and it’s fair to say that she and I have never been close.

“Dad and me didn’t really stay in touch after I came to England with Melanie. We didn’t have much contact.

“I was selling golf equipment and living in Farnborough near the Surrey-Hampshire border. I stayed there even after Melanie and I divorced in about 2003 and she returned to South Africa.

“The saddest part of me being in England is that I don’t see my kids, who are 17 and 16 and from my first marriage – to Debbi. I saw them in 2005 and again in 2008 but have to be content with speaking to them through Facebook, email and occasionally on the phone.

“They virtually live on the beach in Durban and are also sports-orientated. They are into cricket, swimming and life saving. They have their friends who they want to network with, so it’s difficult to stay in anything like regular contact.”

Another cloud, even darker, was on the horizon. Darrell continues: “I was with a new girlfriend, a South African called Sam who I met in England, when I started suffering from headaches. She told me in about March, 2005, that I should have a blood test.

“I went on the Monday and they told me the next day they had picked something up in my kidneys and I should see my doctor straightaway.

“I was in hospital before I knew it in Frimley and was kept in for three weeks, on emergency dialysis at first. Then I was on a dialysis machine three days a week for about five months.

“People can live on machines like that for years but I wanted better quality of life because I always felt drained the following day. I’d gone on the donor list immediately but they told me it could take four or five years to get lucky and apparently I didn’t even get close to a match.

“Then Mum, who was still in South Africa, phoned Dad to tell him I was ill. That was in the September or October and he jumped pretty quickly. He basically said he was coming over as long as he could get the money together. I was stunned because we hadn’t spoken for seven or eight years. 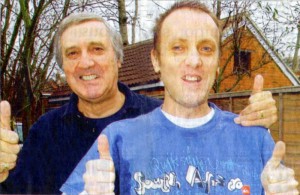 Johnny (left) and Darrell, as a cutting from the Fleet News captured them shortly after their operations.

“He knew he could live with one kidney, so he decided to donate the other one to me. He said it was no way for me to live my life as things were.

“It was a whirlwind. He just had a blood test in South Africa and was told we would have to undergo vigorous tests to make sure we were a good match.

“I was on the machine when he and his partner arrived. His sister, my Aunt Mary in Wednesbury, had paid for the air tickets. He sat on the bed and promised me he would get me off dialysis. We had tests virtually every day for two weeks and had another good chat one night when we went out for a beer.

“He confirmed he wanted to give one of his kidneys to me and I was obviously happy about that, although I told him he didn’t have to. Two or three weeks later, the transplant was carried out. He left hospital after a couple of days because it’s usually an easy operation for the donor. And he soon left England again.

“I had about two weeks in hospital following the surgery and was off work for nearly a year. Because of my illness, I left American Golf, who I had been with since 2003, but they took me back later and I’m still there now.”

It would be nice to say there’s a happy ending, with good health all round and the disparate members of the family close again, emotionally if not on the world map. Alas, only part of that desirable outcome has come to fruition.

“My health is good these days, although I’ve had a rough spell this year that delayed this visit to the West Midlands,” Darrell added. “I think it’s the reaction to a painful split with Sam at the end of 2010.

“We weren’t married and have no kids together but I could never give her back what she gave to me in terms of care. She was brilliant.

“She still lives in Hampshire, not far from me. And Mum (Christine) came back to England a couple of years ago and lives just down the road from me. She hasn’t remarried and now has an accent like mine.

“I don’t speak to Dad. Things became a bit strained when they were over here and I didn’t even see him when I went to Durban for 17 days with Sam in 2008. After divorcing Mum, he went into a new relationship and sometimes things aren’t as easy after that.

“I’ve tried to ring him a few times but I’m not even sure the phone number I have is still the right one.

“The irony is that we are a very close family in a lot of ways. My Aunt Mary died a couple of years ago but I love to see the surviving relatives I have in the West Midlands and they always have big get-togethers for birthdays and anniversaries.

“I’ve also had good news from my kids. They are showing interest in coming over here to see London and bits of Europe and they might be visiting in a couple of years.”

With one final sharp intake of breath, I wish Darrell well as we go our separate ways. He isn’t a football fan but ‘keeps track of Wolves’ and something pulls him to the club with whom his father made his name. He wants to go and see Molineux again.

He last watched a game there in the late 1990s when he had also been introduced to long-serving manager’s secretary Dot Wooldridge – and been told by her that he was a spitting image of his father. 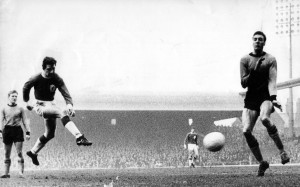 Kirkham Snr (right) under fire from a Chris Lawler shot at Anfield in February, 1965. Picture courtesy of the Liverpool Post & Echo.

The 46-year-old’s strong attachment to his roots also saw to it on a previous visit to the city that he went and met Ron Flowers, who had known him as a baby and toddler, at the sports shop run by he and his family in Queen Street for decades.

Flowers and Kirkham were team-mates and rivals for a wing-half role. Ironically, Flowers told Wolves Heroes several months ago that he was once tempted to play and live in South Africa.

The tale of his old colleague is a cautionary tale, however, of how such moves can sometimes be fraught with difficulty.