A Player And Story Teller Supreme 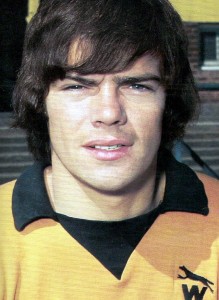 Goodbye to another of the Molineux greats.

Answer: They all played upwards – in many cases a long way upwards – of 320 first-team matches for Wolverhampton Wanderers.

Answer: They all had testimonials. Please note that Munro’s name is not on the second list.

It is one of the sad ironies of Molineux life over the decades since that the one man who needed a financial leg-up more than any other in the years beyond his playing career missed out.

Frank was only a few days short of completing ten years’ service at the club when he turned a loan move to Celtic into a permanent deal in December, 1977. And it wasn’t even as if he liked being at Parkhead. In fact he hated it.

His subsequent decision to go to Australia for several years, combined with the drastic regime changes at Molineux in the meantime, then scuppered his claims to the final pay-day with which footballers of his era and longevity were traditionally honoured.

It’s unlikely Frank left much when he died last night, aged 63. No-one gets rich on disability allowance. The ravages of a 1993 stroke – ‘a bloody big one’ – rendered him unable to work as he struggled along on sticks for many years and then in a wheelchair for many more.

But he was better off than most of us in terms of memories. He was full of them; revealing, controversial, funny and never dull or melancholy. That partly explains why he had a steady stream of regular visitors – Dave Wagstaffe, Phil Parkes and John Richards among them – to the Wednesfield care home at which he saw out his time.

I was always a sucker for the tale he told about Derek Jefferson scrambling round looking for his contact lens in the penalty area while Wolves were taking a right pounding in the Baseball Ground mud. His spats with Bill McGarry, whom he once had by the lapels as he reached over the manager’s desk, were compulsive listening, too, and this would be a very good time to go and read (or re-read) the Munro chapter in Peter Lansley’s brilliant ‘Running With Wolves’ book.

Somehow you always felt uplifted by a trip to his place. What could have been a maudling experience seeing him sat there with a shawl over his legs, a fag in his mouth and a cough on his chest was always an hour guaranteed to fly by.

It’s why Waggy put up with running errands for him at unusual hours of the night, why Derek Dougan had a video of the 1967 USA final between Wolves and Aberdeen specially recorded for him and why he was top of the ‘people to see’ list when Brian Garvey and Gary Cutler came back to these shores last year from Australia. He was much more than a damned good player.

Munro during his in and out early days south of the border.

From the team who faced Everton on the day Munro made his Wolves debut in January, 1968, Bobby Thomson and The Doog have also gone. From the side who lost at Leicester a week later in his first away game, we have lost David Burnside as well.

As one fan has commented on Facebook today, the post-Cullis Wanderers are building a strong team up there.

Munro would walk into that and many another side. Although fitful in effectiveness when initially signed by Ronnie Allen as an inside-forward, he was a revelation when McGarry switched him to the centre of defence. He stayed there for eight years, mainly with McAlle at his shoulder.

He peaked for two or three years around the first League Cup triumph, captaining the side in Mike Bailey’s absence in the UEFA Cup draw away to Juventus that filled him with pride and again in the FA Cup semi-final defeat against Leeds when Billy Bremner, of all people, hit the only goal. Repeat: Dig out that Lansley tome!

But it all came right at Wembley when he did as much as anyone to quell the considerable threat posed by a Manchester City forward line made up of Mike Summerbee, Colin Bell, Francis Lee, Denis Law and Rodney Marsh.

Frank was thrilled to be asked to swap shirts by Law at the end. The photos and footage shows him to be the only one in sky blue in a sea of gold and back celebration.

He might well have been accompanying Law to that summer’s World Cup finals but missed the final cut to 22, having made the initial 30. In West Germany, Willie Ormond preferred the likes of Jim Holton and Martin Buchan.

Munro won only nine senior international caps. No disrespect to Christophe Berra but, had he been playing today, he would have been closer to 90. He was forceful and aggressive like all the best defenders but also blessed with a gentle touch that meant he brought the ball out quite brilliantly from the back.

He knows Wolves shouldn’t have been relegated in 1976 but his swansong was to play a full role, often as skipper, in the side who bounced straight back as champions. His final game – like the last one of his time on this earth – was an odd-goal win in Lancashire, a 1-0 success at Bolton providing a fitting end to the club’s centenary season. 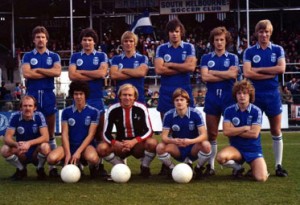 Munro (two in from the right on the back row) in Melbourne. Next to him is Alun Evans, with Bertie Lutton on the right end of the row.

Frank, after a bust-up with Sammy Chung, first went back up to Scotland, then Down Under to Oz. Wolves were barely recognisable by the time he came back after several years in Melbourne, where he combined football with a job as a traffic officer at a local airport.

As he recuperated in hospital at the start of his chronic health problems, his numerous get-well cards included one from Billy Wright. It was a welcome tonic on a long uphill road.

Thank goodness Munro didn’t do self-pity because he had a lot to bear. He enjoyed welcoming house callers and relished those regular trips to Wolves games but there was obviously such a lot he couldn’t do.

He had long since lost the letter from former chairman Harry Marshall promising him a testimonial and he didn’t have much to show, financially or in terms of souvenirs, from the game he had graced for almost two decades.

Even by the time he reached the Wembley tunnel in 1974, he had given Law’s sweat-stained shirt to a fan in a wheelchair. How poignant is that? Although I was delighted in recent years to see a well-stocked photograph album on his coffee table, other keepsakes, like the Scottish caps, had melted away and that cherished tape from The Doog had been sent to Australia for the enjoyment of other members of the Munro clan. Maybe a testimonial wouldn’t have helped him that much after all.

Frank Munro had been reminiscing away with Waggy for the last couple of years with the aim of writing an autobiography that presumably won’t now see the light of day. 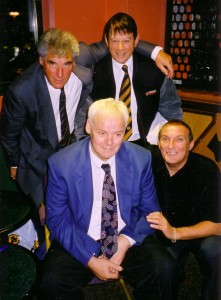 He got by with a lot of help from his friends.

Fortunately, he had already passed on plenty of those precious anecdotes to those around him who are now left to mourn the loss of a man of great heart and spirit.

Waggy, with Lofty Parkes, was in attendance at the end and provided the most touching of the flood of tributes today. “So glad I was with you at the final whistle,” he wrote. “RIP my dear friend.”