Farewell To Frank A Moving Occasion 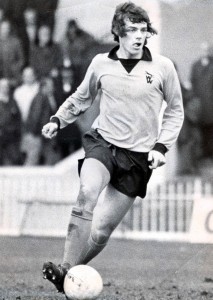 Frank Munro - for so long a colossus at the heart of Wolves' defence.

From London, the Lancashire coastline and even Ayrshire, they converged once more on Wolverhampton today to toast the team-mate they loved and lost.

The funeral of Frank Munro, barely a couple of miles from the stage he graced for ten years, was marked by the sort of turn-out that is reserved for the special ones.

It has become a cliche on such occasions but the man himself would have loved to pull his chair up alongside them and join in the nostalgic chatter which flowed like the drinks with which they toasted his memory.

He would have been particularly flattered at the trouble to which a few of his old pals went in order to pay their respects.

“Look, there’s Danny Hegan,” said my front-seat passenger Jim McCalliog an hour after he and his partner Debbie had stepped off the train from Glasgow.

Hegan has kept a distinctly low profile whenever Molineux reunions have come round but was delighted to be among the throng honouring a man whose years of suffering ended with his death last week at 63.

What is it about footballers? At Bobby Thomson’s funeral two years ago, Peter Knowles bounded up as if he had never been away. Knowles was there again at St Anthony’s Roman Catholic Church in Fordhouses but this time it was Danny Boy who was a centre of attention, picking up where he had left off with his departure from Molineux in 1973.

“I bet I haven’t seen him for 40 years,” McCalliog added, which made it one heck of a spot because some players had struggled to recognise him even when his photo was pointed out to them on this website. “In fact, there are a few players here I haven’t seen since I was 26.

“I don’t particularly stay in touch with ex-colleagues. You just tend to bump along, knowing that you will be back together every now and again. It’s just that it has taken a bit longer with Danny!”

Munro was a help when we first tracked Hegan down in 2008, reminding us he would still be speaking with a strong Scottish accent and probably favouring an Irish bar. Right on both counts.

Hegan, accompanied by the Scottish Bobby Thomson, was quickly filling in some of the missing decades for those greeting him – and didn’t have far to look for friendly faces.

There, too, from the homely dressing room he knew were Kenny Hibbitt, John McAlle, Derek Parkin, Geoff Palmer, Steve Daley and Gerry Taylor. Mike Bailey, up from South London, John Richards, Phil Parkes and Dave Wagstaffe were among the pall bearers. 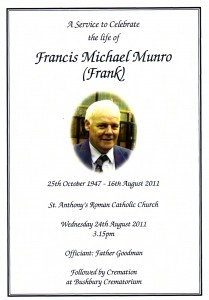 To a man, they loved Frank, who, we were informed in the service, had not only had a difficult end to his life but also a tough start. Baptised a Catholic, he had lost both his parents by the age of two and went off with his three elder brothers to live with a grandmother, who passed away when he was nine.

One of his siblings hit him when he scored on his debut for the ‘wrong’ side in a Dundee derby and he continued to rise in the face of much adversity when graduating via Aberdeen to Wolves in 1968.

“Frank came to Ronnie Allen’s attention in America in 1967,” Bailey said in his personal tribute. “The fact he scored a hat-trick against us in the final of that USA tournament might have had something to do with it.

“His greatest asset in my view was his ability to read the game. He had a quick football brain that put him one step ahead of his opponent and, like all great players, left him with more time on the ball.

“At Wembley in 1974, I thought he produced his finest Wolves performance. He and John McAlle were simply brilliant. When we were all celebrating at the end, though, he had a different agenda……he swapped shirts with his hero Denis Law. Now why didn’t I think of that?”

The skipper lamented the fact there would be no more phone chats with his trusty no 5 and added: “Our team is decidedly weaker today with the loss of one of our best mates.”

The singing of football’s most famous hymn, Abide With Me, was another part of a service that concluded, as it had started, with a moving rendition from a bagpiper. Among the floral tributes was one from Alan Sunderland. He and Gary Pierce were the only surviving members of the 1974 League Cup starting side not present.

Frank’s bride from 1967, Margaret, was in a congregation that also contained several dozen fans, some wearing retro shirts and scarves. The couple’s two sons, Stuart from Melbourne and Scotland-based Grant, were there as well, so was Naomi, the player’s companion and carer for plenty of the more recent years.

As a throwback to his time in football Down Under, there was an appearance from Bertie Lutton’s wife Carol and son Lee, the former living close enough to the church these days as to have been able to walk there.

Frank wouldn’t have wanted anyone going home without raising a glass to him and the pavilion at Fordhouses Cricket Club was awash with memories for some hours following the cremation. 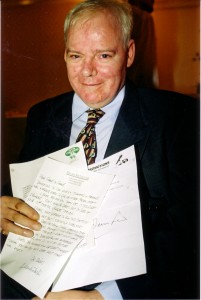 Frank shows off best-wishes letters around the time of a benefit function for him several years ago.

“He was a terrific player,” Parkin said. “We joined Wolves within a few weeks of each other and were in a hotel together for a while.

“He used to bully me with his banter at times but he was fairly quiet on the pitch. He just had a calmness and composure about him that helped keep things together at the back.”

Waggy has let it be known that he is planning to continue writing up the Munro memoirs that the two of them had been working on for a year or two. Like today’s proceedings, the book will have an awful lot to pack in.