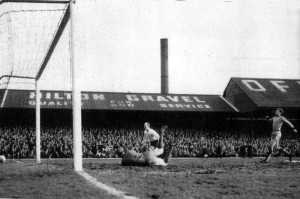 It’s not only through funerals and official reunions that Wolves players from bygone decades are finding themselves back in contact with each other.

We at Wolves Heroes are proud to be playing a part in the reconnection process as well and can report another couple of successes in recent months.

Our various communications with Dave Maclaren, coupled with the feature we posted on him three weeks ago, led to the former keeper asking to be put in touch once more with Ron Flowers and Dave Wagstaffe – team-mates of his at Molineux four and a half decades ago.

The happy outcome is seen here in an extract from an email from the Scot’s daughter Alison, who also lives in Australia.

“My father and Ron had a long chat recently,” she reports. “He was very happy at having the chance to catch up after all these years.  Thanks so much for making it possible.”

Maclaren Snr is no user of the Internet, resident as he is in the bush in Victoria, but was also made aware of our story announcing the death of Frank Munro – a development over which he expressed sadness.

After their Molineux years, the two were colleagues at Melbourne Hellas, one as manager, the other as a player.

Ken Knighton, meanwhile, is back in contact with Graham Hawkins, a player he knew well at both Wolves and Preston.

So well, in fact, that they once set up in a car repair business together in Lancashire (see story from December 10 last year).

“I hadn’t spoken to Graham for a long, long time,” said Bristol-based Knighton. “It was lovely to talk over old times and do some catching up.”

At least one more fond reunion is being planned. Bertie Lutton is due back in the UK from Australia for an extended stay next summer and is determined to meet up again with his old pal Jimmy Seal, who he hasn’t seen for more than 20 years.

They were each best man to the other during their playing careers. 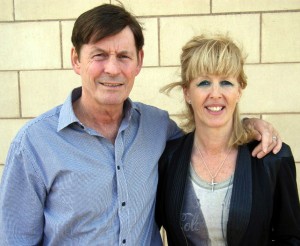 Jim McCalliog back in town this week, with his partner Debbie.

Finally, an interesting off-shoot of Jim McCalliog’s visit back to the city this week…..

Not only did he go to Wolverhampton Races on Wednesday night so he could take a nostalgic look round the area where the players sometimes trained, but he also spent some money in the Molineux shop – on a Wolves dog lead!

* A memorial mass for Frank Munro is being held from 10am to 11am tomorrow (August 28)  at St Mary & St John’s RC Church, Snow Hill, Wolverhampton.