Grateful For a Taste Of The Big Time 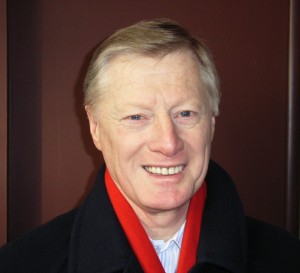 John Southall didn’t play for Wolves’ first team. He didn’t even quite make the reserves. But, as a local lad from a family who had the old gold and black coursing through them, he remains immensely proud of the years he spent toiling away in the club’s junior teams.

There were highlights along the way, too, like his appearance at Old Trafford in the quarter-final of the 1963-64 FA Youth Cup and being handed the chance to face Jimmy Mullen in a charity game.

“That Youth Cup run was an exciting experience,” he says. “I look back on it very fondly because Dave Clements, who was an Irish amateur international, was in the team, as were Graham Hawkins, Fred Kemp and Peter Knowles.

“We had a bye in the first round and beat Thorneywood Athletic comfortably enough in the second round.

“Fred Kemp scored our winner against Aston Villa at the next stage, then we were drawn at home to Birmingham and thrashed them 6-1, when Clements hit four of the goals.

“I have kept cuttings of the games and it’s interesting to see that all the morning papers seemed to carry sizeable reports. The ties appeared to matter a lot more then than they do now.” 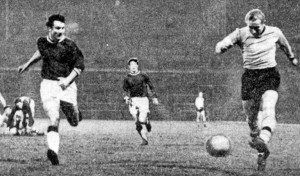 Dave Clements fires home one of his four goals against Birmingham City youths.

Gordon Roberts and the late Dave Carrick also scored against Blues in front of 3,684 as Wolves secured a last-eight visit to Manchester United, the club who had dominated the tournament throughout its early years by winning it five seasons in a row.

The Molineux cubs took an early lead through Paddy Buckley and would later come up with a brilliant goal from Hawkins. But the formidable home line-up contained Jimmy Rimmer, John Fitzpatrick, Willie Anderson, David Sadler and John Aston – and refused to lie down.

“I thought I was going to be marking George Best,” Southall added. “He was down on the programme but he had a game in the first team the following night, so I was up against John Aston instead in front of nearly 14,000.

“It was a terrific match and we lost 3-2. John Aston scored the winner near the end and United went on to win the cup again.”

Southall had frequently played for the Wolverhampton Amateur League under-18 XI and was captain of the side who included Phil Parkes when they won the Birmingham County FA’s Featherstone Cup in 1962-63.

By the time he graduated to Wolves’ Midland Intermediate League side, he was among the likes of John Harris, John Galley, Micky Evans and Laurie Calloway, as well as Clements, Hawkins, Kemp and Knowles.

“I also played a lot in the Worcestershire Combination and we were always supervised by the first-team trainers and coaches, Joe Gardiner, Bill Shorthouse and Jack Dowen,” he added.

“We trained in what bits of kit were lying around, so it was usually a man’s gear on a lad and it might not fit very well. It wasn’t the only difference I noticed…..as a kid, I once collided with Bill Shorthouse in training and just bounced off him! 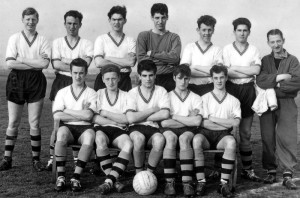 Southall (back row, far left) with Phil Parkes as one of his team-mates in under-18 football.

“We had a proper coach to travel in to away games in the Worcestershire Combination and Midland Intermediate League; sometimes it was the first-team bus. Otherwise it was a gold Bedford Doormobile that had Wolves’ name down the side and was driven by another of the coaches, Dave Lapworth.

“The closest I went to playing in the reserves was travelling on stand-by with them to Burnley. We took the train to Manchester Piccadilly, had lunch at the Grand Hotel and then completed the journey by coach.

“Funnily enough, the players were messing about in the dressing room before the match and one of them was winded by the ball. For a while, I thought I might be getting a game but he recovered and I watched from the sidelines next to Jack Dowen.”

There was one other flirtation with the big names, though, after he went to Castlecroft to watch a team of television all stars against former Wolves players in March, 1964. 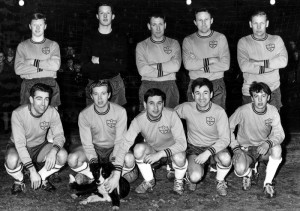 Again on the far left of the back row....this time ready to tackle Jimmy Mullen with the TV All Stars.

“Fifteen minutes before kick-off, Dave Lapworth called me down and said one of the All Stars team, an actor called Jeremy Young, hadn’t turned up, so I was playing. I was in there like a shot and had the thrill of lining up at right-back against Jimmy Mullen.

“For three seasons or so, I was meeting absolute legends of the game at a time when Wolves were not far past their peak. It was an amazing feeling for a lad like me in his teens to be involved with the club that all my family loved and supported.

“I wasn’t good enough to make it but I wouldn’t have missed the experiences I had at the club for anything – even going to Blackpool once on a day out organised by a couple of the reserves, Micky Evans and Dave Carrick. You weren’t excluded just because you were an amateur.”

Southall saw his career interrupted by a serious ankle injury and, although he had brief spells with Nuneaton Borough and back in the Wolverhampton Amateur League, the need to make a living elsewhere became a higher priority.

He went into accountancy and then general management, reaching the post of MD with more than one company before purchasing a small packaging business in Wombourne in 1980, growing it and selling it ten years later. He continued to run the company and others within the new group.

He retired in 2002 and lives at the age of 65 in Seisdon – plenty close enough to Wolves to make full use of the season tickets he and his son Andrew have held since 1986, John’s nonagenarian father Leslie also having attended every home match until recent times.