As we continue to look at ways of making this website a little more interactive, we thought it might be useful to highlight our efforts more broadly from time to time – in diary form.

Our on-line postings three or four times a week reveal the fruits of our labours but considerable work goes on behind the scenes as well, so here’s the first in an occasional series showing our numerous dealings with the extended Wolves family. 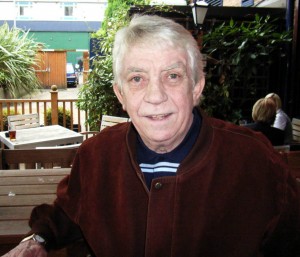 Danny Hegan....well, would you have spotted him?

Wed, Aug 24: Picked Jim McCalliog and his partner Debbie up from Wolverhampton railway station – no mean feat as Jim steadfastly refuses to carry a mobile phone. Delivered them to their usual overnight hotel, the welcoming Ely House on Tettenhall Road, and was regaled by Jim at Chapel Ash with a tale about how he had stopped his car there some 40 years ago when spotting a pedestrian in distress with what turned out to be a breathing disorder – and found it to be his brother. There’s clearly nothing wrong with Jim’s eyes. Despite not having seen Danny Hegan since they were at Wolves together, he spotted him walking away from the church as we approached for Frank Munro’s funeral. Someone suggested Danny was looking for one of his old watering holes, The Vine on the A449. It was demolished around ten years ago.

Sat, Aug 27: Heard as I was walking into Villa Park to cover Wolves’ game there today for The Independent and Independent on Sunday that Peter Withe was present. Sat in the press box two seats along from Tony Morley……didn’t he nearly come to Wolves once? Over to the left, Robbie Dennison was also on summarising duty.

Sun, Aug 28: Amid the extremely busy ‘afters’ on Wednesday teatime, when we were handed a drink voucher bearing the message ‘raise a glass to Frank,’ I didn’t get chance to introduce myself to his widow, Margaret (they never divorced), or their family. Partly put that right tonight with a phone call to her in Scotland, in which I also spoke to their son Stuart, who flies home to Australia tomorrow.

Thurs, Sep 1: A hoped-for meeting with Bobby Gould having not materialised, I shoehorned a second visit to the Swindon home of former Wolves Academy coach John Trollope into a day of appointments in the West Country. I’d borrowed the only copy of his autobiography that he had and didn’t want to risk sending it back by post. Also stopped off in the town centre to become acquainted with Don Rogers at his sports shop in anticipation of a possible forthcoming feature for the Backpass magazine. He was a dazzling winger who was once linked with Wolves.

Sat, Sep 3: Bumped into Derek Parkin tonight at a joint family birthday party at the home of Jim Heath in Telford. Jim is nearing completion of an excellent book that is being released this autumn by Thomas Publications and he also welcomed another Wolves Heroes contributor, Gwilym Machin, as a guest, along with the long-time A Load Of Bull editor, Charles Ross.

Tues, Sep 6: Spoke by phone again with former Wolves winger Dave Thomas in County Durham. I interviewed him in May about he and his wife’s return to the north-east after several decades away but delayed publication of the story until we had received an up-to-date photo of him. It arrived this week from the couple’s daughter, Polly, in Sheffield. 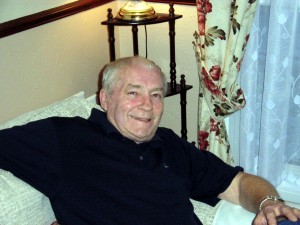 Terry Wharton....turned out at The Wergs for his former Wolves team-mate.

Thurs, Sep 8: Enjoyed helping out for several hours today at the Barry Stobart golf day at The Wergs, near Wolverhampton. The occasion was organised by Barry’s long-time pal Graham Newton, who has an absolute heart of gold, a lovely way with people and slightly manic organisational skills. Messrs Wharton, Wagstaffe, Parkes, Daley and Carr were in attendance, as was Wolves director John Gough, who announced one of many excellent auction items – a VIP day out at a game at Molineux. Another was a Wolves shirt I’d picked up earlier in the day and then had signed by Mick McCarthy at his lunchtime press conference. Mick doesn’t know Barry but was interested to hear they share South Yorkshire roots. John Richards couldn’t play because of several days in the Home Counties on business but his wife Pam was in the same four-ball as Steve Daley, who was brilliant as the after-dinner entertainment, and his wife Lyn. We all marvelled at how Maureen Stobart held things together as she stood up and thanked all concerned, Graham in particular, for the day and explained that her husband was in fact suffering from vascular dementia, not Alzheimer’s disease.

Fri, Sep 9: Had a long Skype conversation with Les Wilson and his wife Lois in Vancouver after insisting they brought their adorable golden doodle Scholesy to the screen with them. Les couldn’t get enough of the news from the previous day’s events, then surprised me by saying he knew Dave Thomas well. “When I was signing a local lad called Raphael Mazzucco for Vancouver Whitecaps, I happened to ask his parents whether they knew of anyone who would provide digs,” he said. “Dave had signed for the Whitecaps from Wolves not long before and had had enough of living in a hotel while he waited for his wife to arrive. The Mazzuccos said there and then that they would put him up and they have remained such friends with Dave and his family for 30 years or so that they went to stay with him down near Portsmouth not long ago.” Les, as enthusiastic as ever about all matters Wolves, signed off by asking me to remember him to Harry Redknapp if I had chance at the Wolves v Tottenham game.

Sat, Sep 10: To my surprise, I was able to speak to Harry briefly in the press room after Spurs’ win at Molineux. “Cor, Les Wilson….lovely bloke,” he said, his face breaking into an even broader post-victory smile. “Send him my best wishes. But where did all those years go?” Turns out the manager was not only a 1960s and early 1970s adversary in England – and an opponent at the 1969 USA tournament in which Wolves faced West Ham – but also an assistant to former Wolves winger Alan Hinton (another close friend of Wilson’s) at Seattle Sounders in the late 1970s. 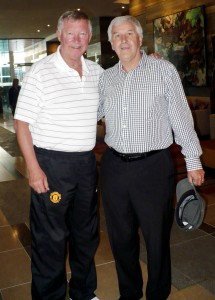 Tues, Sep 13: Caught up on more golf news today. The annual Wrottersley ex-Wolves day featuring Lofty, Waggy, Steve Daley, Willie Carr, Mel Eves, John McAlle, Fred Davies and Phil Nicholls took place on Sunday. I’d like to have gone if Wolves v Spurs writing-up hadn’t kept me busy at home. And a phone call to Graham Newton revealed that the Barry Stobart money-raiser brought in more than £2,700. Great news. We at Wolves Heroes took delivery today of a long interview with Bob McNab by our ever-encouraging California-based correspondent Charles Bamforth. That’s one in the can for later in the week and I look forward to reading how well Bob has done in business. Probably no better than Raphael Mazzucco, mind……a link sent by Les shows that his ex-Whitecaps signing has supposedly been making $10,000 a day for photography shoots that have included supermodels like Elle Macpherson. Oh well, someone’s got to do it……