Family Pride To Be Reflected In Print 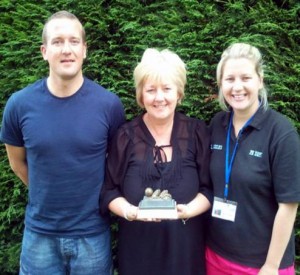 Gaynor Kendall, with Lee and Lori, as photographed by author Clive Corbett.

Mark Kendall’s family have underlined a firm friendship in the West Midlands by being interviewed for a forthcoming Wolves book.

The popular keeper’s widow Gaynor and the couple’s grown-up children agreed to a visit to the family home in South Wales by Clive Corbett, author of the soon-to-be-published Out Of Darkness.

And the session was helped along by the familiarity of working life in these parts several years ago.

“Gaynor and Mark’s daughter Lori was a PE teacher at the school in Pershore where I’m headmaster,” Clive said. “In fact I appointed her.

“Mark actually came up to the school at one point to do some coaching with the girls and, knowing I was a Wolves fan, kindly brought me one of his old number one shirts.

“It was a big shock and very sad news when he died in May, 2008, and Lori left in the October of that year because she wanted to be closer to the family home.

“I was extremely grateful they were happy to see me, though, because the book concentrates on the seasons from 1977 to 1990 and Mark played a big part in several of those.”

Kendall made 177 appearances for the club after being signed mid-way through 1986-87 from Newport County, initially on loan.

He kept a Wolves all-time record 28 clean sheets in a season during 1987-88, when both the Fourth Division title and Sherpa Van Trophy came to rest at Molineux. 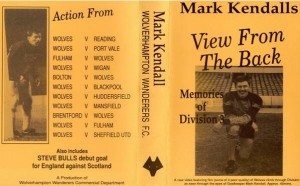 He was big in films, too!

Among the dozen-plus other interviewees for the book are Derek Parkin, John McAlle, Kenny Hibbitt, Sammy Chapman, Graham Turner, Graham Hawkins, Mel Eves and the writer of the foreword, Steve Bull.

The title is a follow-on from Clive Corbett’s first book, Those Were The Days, which has recently sold out.

A full tribute to Mark remains on this website. His was the sad first entry in our Obituaries area.

* Some places remain at a Paul Gascoigne Evening – sponsored by Wolverhampton-based First4Staff – at the Copthorne Hotel, Brierley Hill, this Thursday. Tickets and further information about the visit of the one-time Wolves trialist are available from organisers Route 39 on 01902-680023.